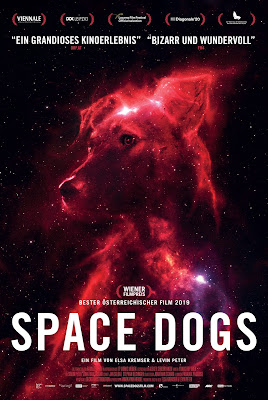 Hitting Ovid.tv on January 14 is SPACE DOGS a look at stray dogs in Moscow. As told in the narration the film sees to compare the life of the modern dogs to that of Laika, the first animal sent into space. It was a one way mission and Laika was left in orbit unable to return home. The film posits that her ghost has returned to the streets of Moscow and wanders with the strays.

There have been several films about stray dogs over the last year or so. Some have been better than others. All have been similar in they are trying to give a dog's eye view of being a dog. Of all of the films this one is the most somber, telling the story of Laika while showing the struggles of the current strays. It's a hard life that isn't fated to end well.

To be honest I'm mixed on the film. While in many ways this is one of the best dog docs out there the somber narration and the downbeat ending makes me kind of regret visiting this. Don't get me wrong it's a great film, just one that is extremely sad and heart breaking.

Forgive me for not saying more but the ending of the film, which links up to Laika's end haunts me even after three weeks.

Recommended for those who want to see a good, if sad film about dogs.