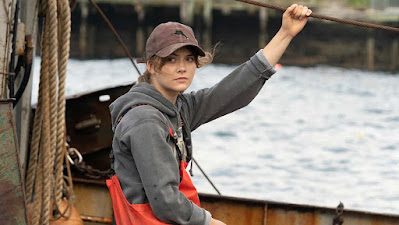 By the time I saw Siân Heder's CODA I had seen over a hundred films in the 29 days that made up January. I say that because I want you to know that when I call CODA one of the best films of 2021 that I've actually seen enough films opening this year that I can be safe in making that call.
The film is the story of high school senior Ruby Rossi. She is a child of deaf adults (the CODA of the title). She gets up every morning at 3am to go fishing with her dad and deaf brother because some has to be able to hear the radio and talk with the hearing world. She joins the choir and meets a music teacher who will change the course of her life, assuming that her parents won't need her forever.
Bring tissues. Lots of tissues. Don't worry the film is full of happy tears, buckets and buckets of happy tears. I have not seen a film that make me this stupidly happy in a long time.
What I love abut the film is that despite the film hitting any of the expected notes, Heder tweaks them in such away that she improves upon them. I kept thinking that she would do certain things, and she did, put she put them in places that I never expected and made me feel all warm inside.
Eugenio Derbez as Bernardo Villalobos, the choir master is the teacher we all should have had. I was actually lucky enough to have one exactly like him, a Mr Ronald Wickie in grammar school. He had a  passion for music that was unmatched and which he passed on to everyone he taught. Like Mr V he found ways to connect to the kids and literally change their lives.
Troy Kotsur deserves an Oscar for his portrayal of Ruby's dad. If you want to know the moment where my brain exploded watch him as he "listens" to his daughter sing with his hands. Performances don't get better than that. I also was rocked at something that happened later that left be unable to do much of anything for a good long while after the film ended.
And yes Emilia Jones is awesome and Oscar worthy, but everyone will tell you that so you don't need me to repeat it.
And did I tell you that the film is funny? It is very very funny for all the right reason, especially since the jokes are situational and real.
I freaking love this film and can't recommend it enough.
Posted by Steve Kopian at January 29, 2021