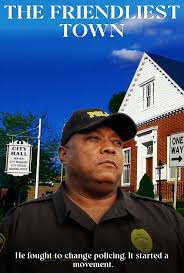 A look at the city of Pocomoke in Maryland. The town hired Kelvin Sewell as the town's first African American Police Chief.  Under Sewell's leadership crime plummeted and his community based policing changed the ton for the better. And then the white city council fired him out of nowhere and wouldn't say why. The community balked at the firing, thus setting up a long battle and exposing the racism in the town and the state.

Good documentary about the deeply rooted racism in the Maryland. Its a film that shows how good people get smashed down by people who hate them for no good reason. Its also a nasty tale of how officials won't go along with what they want. As one person says the city council thinks they really don't have to answer to the people. Its a story that reveals the rot that has inhabited the country. Its a story that needs  to told and more importantly be heard

If  there is anything wrong with the film it's  bland presentation. Don't get me wrong what is here is great but the presentation is so matter of fact it isn't as gripping as it could be.

Quibble about presentation aside this is a hell of a tale.