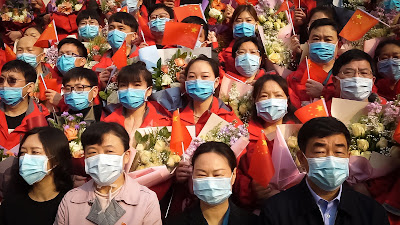 Nanfu Wang's IN THE SAME BREATH is a look at the Covid Crisis in China and to some degree in the United States. It begins with the huge New Year's Day Celebrations in Wuhan in 2020 and it concludes with the same celebrations in 2021. It is an intellectual punch in the face about how our governments are killing their people in order to look like they are in control.

Much of IN THE SAME BREATH is made up of videos shot under the noses of the Chinese government. Wang began by collecting videos posted to the internet by people in China. She archived as much as she could before the government had it pulled down. She then sent out camera people to film. While they would get permits to film in hospitals thy were forced to turn the cameras off if anyone said anything questionable. She then had them set unmanned cameras and they picked up all sorts of things. The result is a portrait of  country scrambling to hide the truth and bury the dead before anyone notices. It is dire warning about the dangers of censorship and misinformation, a warning that that the Unites States and Donald Trump didn't heed

While less emotional than some other films on the pandemic I've seen it still packs an emotional punch as details of what it's really like are revealed, as are the names and faces of the people who tried to tell the truth and save lives but who only found oblivion when they disappeared.

The film takes a damning look at the US  by giving us a look at the emotional toll of front line workers here in the states. It also lays the blame squarely at the feet of former president Trump by showing how the anti-maskers and covid deniers are only parroting his own words. We maybe free but we are just as bad as China. There is a terrible irony that all the Trump supporters follow his lead in blaming China  for all the trouble but he and is regime copied it without credit time and again.

As powerful as the film is for most of its running time, the film falters slightly in the second half as the reasoned presentation of the facts gives way to a long pained scream of a presentation. The film's presentation ceases to be measured and instead becomes more emotional. Its clear Wang has been rocked by events, which is fine, but her carefully constructed tale seems to be pulling in everything to win it's point. It's not fatal but it keeps the film a half a step from true greatness.

Having world premiered at Sundance IN THE SAME BREATH will be hitting the festival circuit before hitting HBO. It and it's warning of possible impending doom is required viewing.