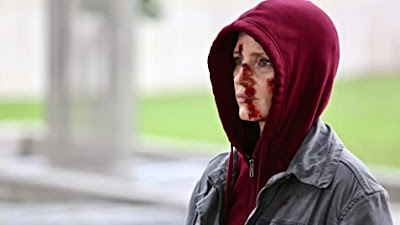 Jessica Chastain plays Ava, a former addict who cleaned up her act and now works as an assassin for a secret company. When she is set up by one of the men running the company she has to fight for her life and that of her family.

Good thriller suffers from the extremes of having too much going on with her personal life and things not being all that clear in her professional life. Ava has lots of baggage with her sister who is dating her ex-boyfriend and her mother who has heart problems. Frankly that could be a whole film of it's own, but the film is welded to a story of John Malkovich and Colin Farrell battling over Ava's continued existence, Malkovich wants her alive and Farrell wants her dead. This whole section of the film seems kind of obtuse for no real reason and when its clear that no answers are really coming the film kind of collapses.

To be honest the film is gangbusters for the first half and anything with Malkovich but the second half, a long battle between Ava and Farrell is weak. And the whole incestuous implication between Farrell and his daughter is extremely skeevy for no good reason.

To be honest I like the film but I don't love it- but I d recommended it since it is now streaming on Netflix where it won't cost you anything extra.