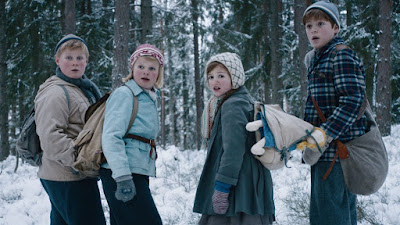 In Norway, Gerda, a young girl obsessed with the Three Musketeers is living blissfully with her parents and her brother. When the Nazis arrive and arrest her parents she must spring into action and get the Jewish children hiding in the basement to safety in Sweden. While complications arise Gerda must become  like her heroes and save the lives of people in need.

If you can ignore the opening narration THE CROSSING might be the first great film you see in 2021. A grand adventure that is going to keep you on the edge of your seats, its a perfectly formulated film that will work for kids as well as parents. It beautifully doesn't rely on nastiness in order to keep you glued to the screen. Rather the film simply tells it's tale and lets the details carry the day.

I loved this film a great deal. While I went into the film thinking it might be a nice minor distraction I came out finding that it is a spectacular fil on its own terms capable of standing up to the best Hollywood has to offer. To be perfectly honest it is finding films like this that makes the New York Jewish Film Festival the most important festival to start any film year.

And please forgive the lack of details I don't want to clue you into the twists lurking with in this gem.