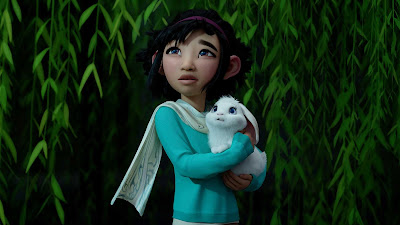 Glen Keane's OVER THE MOON is a joy. The story of a young girl who takes a trip to the moon in the wake of her mother's passing.

I have been trying to figure out what to say about the film. Do I give you details or not. I think not because just watching this film go through it's paces is such a delight.

Accused of being a Disney knock off by some critics they seem to be missing the point since Keane was a in the Disney trenches for decades and the Mouse House is in his blood and what the film is is a kind of Disney riff. The rhythms and plot points are similar to what Disney has mass produced for years but with better everything from visuals, characters, songs and genuine sense of heart. To be certain this may be the best film Disney never made, but it also is better than most Disney films of the past decade or two because it has real characters and a genuine joy that you never feel from Mouse House.

I love this film a great deal. It is an absolute wonder that I've revisited a couple of times on Netflix.

See this film and fall in love.