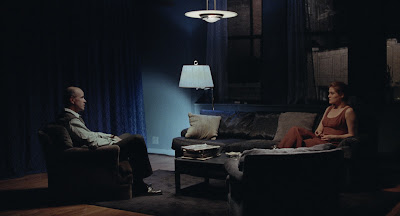 The question I've been asking for the last 30 years is why hasn't Tom Noonan been making more films as a director? Noonan's films, I believe there are only, four features are magnificent inde films that are the sort of things that are exactly what you want a really good film- a unique view of the world that doesn't look or feel like a movie but some part of real life. Yes, Noonan is an underrated actor but the truth of the matter is he is an unheralded master director whose small chamber pieces kick you in the chest and make you end up talking to your friends for days afterward.

I know about talking about Noonan's films for days afterward. Way back when his first film WHAT HAPPENED WAS came out my friend Lou saw it and fell in love it it.  It was playing at the local art house, then the New Community Cinema now the Cinema Arts Center, and he came back raving about the film. We literally spent hours talking about the film despite my not having seen it. When I saw it the conversations started up all over again as we pulled the film apart and marveled at the wonderful things it was doing.

What the film was doing was laying open the dynamic of a relationship. A man and a woman meet for a date and then things go all over the place as  lies are discovered and truths are revealed. It is part comedy and part heartbreaking look at loneliness and the human condition. Its a beautifully acted piece that is often a hard thing to sit through since it touches on some truths we may not want to deal with. As good as it is, I can't imagine what this would have been like to do on stage night after night since it is a film that has some really raw moments, what would it be like to expose yourself every night?

WHAT HAPPENED WAS is quite simply a masterpiece. Seeing the film again for the first time in over a decade in order to write this piece, I found that it all came back to me. In some ways it was good, because it was a delight seeing an old fiend, but in some ways it was bad because in the 3 decades since it's release I found that I had enough miles under my belt that the film echoed more for me than I would have liked. The result was it's final third hit me like a ton of bricks.

Thirty years on WHAT HAPPENED WAS still haunts me. It is a film that has never left me since I first heard about it. Where so many other films have been lost to the winds of time, It has never disappeared completely. Will you have that reaction  when you see it? Perhaps not but I suspect that it will hit you hard enough you'll want to tell your friends and to search out the other films of Tom Noonan.