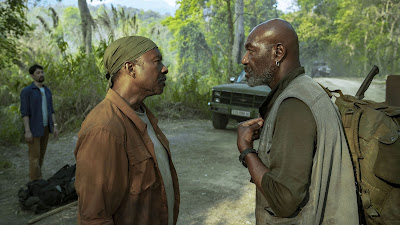 Spike Lee's DA 5 BLOODS came out in the middle of not only the Covid pandemic but also the protests against the police brutality that was and is running rampant across the country. As a result the film hit a raw nerve the echoed with a nation trying to come to terms with how it handled matters of race.

The film follows four GIs who return to Vietnam in order to retrieve the body of one of their fallen comrade. They were not able to do so after the fighting that took his life and when they returned a short time later bombing had altered the landscape. Years later a landslide opened things up and they figured it was now possible to find him. What thy aren't telling the authorities is that they are also looking for a fortune in gold bars. The gold was in a crashed plane which they found. They buried the gold and now are hoping to bring it home as well.

Seeing the film divorced of the riots and protests of earlier in the year DA 5 BLOODS disappoints. An incredibly messy film that has way too much on its mind, the film doesn't know what it wants to be. Is it  a polemic about race? Is it a film about fathers and their children? Is it a caper film? Is it an action film? I don't know if the film really knows and as a result the film seems to run on and on for almost three hours.

Yes Delroy Lindo is great, but outside of his performance this is one of the few Spike Lee films I don't think I'll ever watch again.