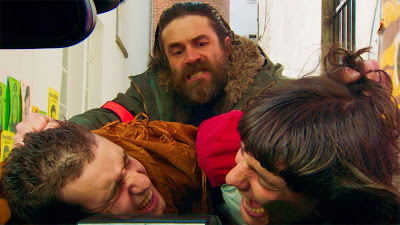 Two incredibly stupid brothers lose their mother's dog. They are given 24 hours to get him back or else they are out on the street.

This film is review proof. This is a film you either love or loath. While probably being drunk off your ass will help you'll know if you are going to like the film in the first two minutes  when the pair fry up some poo and then... yea well. If you find that sequence funny  then you might find the rest of this low brow stupid comedy.

I am not a fan. The problem for me is this is just a film that just aimed at pushing buttons. The jokes fall flat as directors Harpo and Lenny Guit seem to be fashioning jokes not based on what is funny but what is offensive and stupid. Yes they can produce laughs but more time than not you'll think of something better.

On the other hand I can see this film catching a cult following. I suspect had I seen this with an audience of cranked up, and possibly drunk, film fans I probably would have liked it more.

This wasn't my cup of tea, it might be yours.