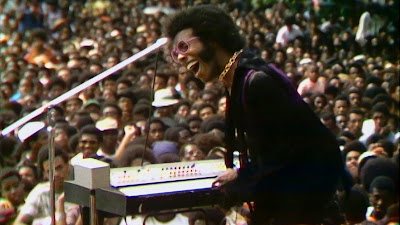 While Woodstock was going on in Upstate New York for three days The Harlem Arts Festival was was happening in park in Manhattan. A series of totally free concerts over 300,000 people listened to the music of Stevie Wonder, BB King, David Ruffin, Nina Simone, The Fifth Dimension and many many others. The whole series was filmed, however because no one wanted to buy it and show it it sat awaiting rediscovery.

The truth of the matter is that while the series in many ways changed the course of  history, many people kind of thought it was a dream since no one really talked about it. Essentially it happened and then was largely forgotten.  Except the footage was still out there and it was found by Questlove who has used it, along with interviews with people on stage and in the audience, to make an amazing, and amazingly entertaining film about the fest and the changes it brought.

This film is a stunner. Its a great music and great history. Its a film that puts you in the trenches on on the stage and gives us a view of how the coming together of a wide variety of African Americans from all over New York changed things. This film will open your mind.

To be honest I can't say much more than this is a truly great film, except I fully expect it to be in the running for the Oscar next year. Yea it is that good.