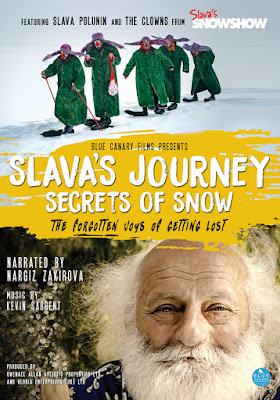 This is a glorious portrait of Slava Polunin and his legendary Snow Show. The man and the show have been touring the world for almost 3 decades bringing joy and wonder to everyone who sees it.

Yes I have seen the show. I saw the show several years back when it played Broadway the first time and I was floored by it. Yes it is a clown show but it is so wonderful and lovely that even if you hate clowns you will be moved to laughs and tears... and then there is the ending- a blinding blistering blizzard in the theater. I have never seen anything like it- ever.

SLAVA'S JOURNEY is magnificent. Part bio, part expose, part performance piece it is not a conventional documentary but more a cinematic attempt at bringing the emotion of the show to the viewer. No it will not reveal the whole show to you, but it will make you feel things like joy and wonder. It will remind you of what the show feels like and make you want to go see it if you haven't.

Yea, it's that kind of a film.

I love this film. It is an absolute delight. It is a film that makes you feel good even as it opens up your mind to something wonderful.

The film plays January 27th as part of Russian Film Week and is a must see. Because it is only 65 minutes the film is running with a Q&A about the film. I highly recommend you see this.