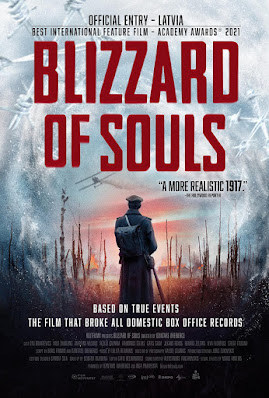 After his family is killed by the German army a young man joins the Latvian army and experiences the horrors of the First World War.

Based on the auto-biographical novel by Aleksandrs Grins, BLIZZARD OF SOULS was a huge box office hit in Latvia where the sense of nation touched the Latvian people. It is the Latvian Oscar entry.

Thuis typical war film frequently packs a real punch. Set on the Eastern Front the film shows us things that we don't normally see in a World War One film. Its not all mud and trenches. There are fields and trees and people. This allows for some stunning set pieces which both horrify our soul while delighting the eye (the machinegunner in the tree). I love that there is a sense of a larger world that isn't just official offices or cities and endless battle. To be certain things there is a kind of polish to some of this and the film takes turns that are novelistic, but it helps turn the film into something truly special.

I really liked this film a great deal. I liked that it didn't do anything I expected. As I said it's not your typical war film. There aren't gallons of blood and body parts. I love that our characters have real lives off the screen. I love that there is a complexity to things you don't frequently see in recent war films (I mean how complex was 1917 really?). Characters are truly not cookie cutter cliches. There is a lot going on that make you get more deeply invested in what is going on and ponder more than what is just on screen.

This film is a quiet stunner. While I don't think the film will end up with an Oscar nomination (forgive me there are a number of films I think the Academy will like better)  I do think you'll want to see this film. Its a powerful indictment of war.