What film made Nate Hood happiest in 2020? 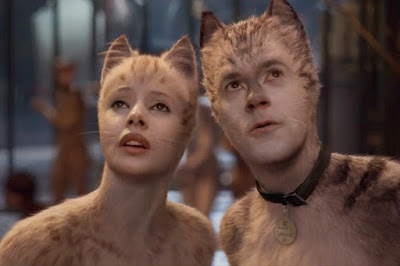 Before you ask, no, this isn’t an ironic pick. I’m not trying to blow smoke at any establishment by picking the year’s most notorious box office bomb, and neither am I trying to rehabilitate this cinematic monstrosity as some kind of misunderstood masterpiece. Tom Hooper’s Cats is one of the most jaw-slackeningly miscalculated, aesthetically horrifying films to ever claw its way out of Hollywood’s gaping maw. It’s the rare film where not a single thing worked—each successive creative decision almost willfully sought to outdo the last in terms of insane lunacy.

And yet not one single film in 2020 made me happier or more thankful to be alive.

Cats was one of the last films I saw in a theater in 2020 before the COVID-19 pandemic shuttered them all, and the memory of that evening has kept me warm all year like the proverbial single match did for the Little Match Girl caught in the snowstorm. The audience I saw it with was perfectly calibrated: about two-thirds were teenagers and college kids who knew what they were in for and the other third were unsuspecting seniors who didn’t. From the first shot—literally, the first shot of the moon dissolving into a rictus Cheshire Cat grin—they were off to the races, howling in incredulous disbelief as each CGI body-suited cat chimera slunk, crawled, skittered, and twirled onscreen.

We laughed ourselves silly that night, tears running down our cheeks and snot dripping down our noses. Raucous screams tore their way through the theater as our feeble minds tried to process the image of Idris Elba’s butt-ass naked Macavity flaunting his genital-less loins at the screen, of Rebel Wilson’s Jennyanydots commanding a regiment of smiling cockroach homunculi in a Busby Berkeley number, of Steven McRae’s Skimbleshanks ****ing EXPLODING mid-pirouette in a cloud of smoke, of Dame Judy Dench starring into our souls as she looked directly into the camera so she could remind us that “a cat is NOT a dog!”

If one of the functions of religious ritual is to give communities the means for public expression of trauma and other socially unacceptable emotions, then my experience watching Cats that night was nothing short of sacred. Nobody left that theater the same person they were when they went in—we had all laughed and hollered, screamed and shouted parts of ourselves into oblivion. We had been blessed. We had been damned. We had been initiated. And in the months of quarantine to come, it proved a useful one, keeping the promise of the cinematic experience alive in my heart as so many theaters went dark. I don’t know when I’ll be able to go back to the movies. But when the time comes, I’ll be ready. I’ll tell ‘em the Magical Mr. Mistoffelees sent me.