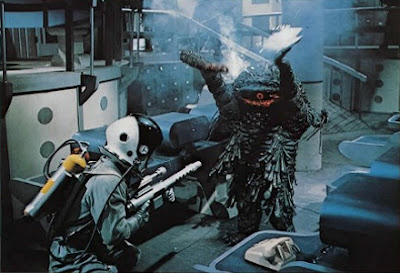 The opening song is completely out of place, but then again we should be amazed that anyone would write a song called Green Slime....once the Green Slime song is done the film settles down into Armageddon territory with an asteroid racing toward earth. A space ship full of astronauts is dispatched to blow it up. They succeed---but no one is aware that they have also brought back the title creatures.

Directed by Kinji Fukasaku, best known these days as the director of The Battle Royale films, this is a big cheese ball of a movie. While hailed by many people as a turkey, many other people hold it in certain regard (well they like it in a cheese ball sort of a way.) I'm in the cheese ball camp because this is a lovable misfire of a movie.

Very much the product of it's time, the film is full of weak model space ships and men in suit monsters. It has men who are men as heroes, beautiful women as victims and stupid men of science as the reason that the slime spawn and take over a space station. Its not so much that the film is silly, its more that it's hard to believe that anyone- say MGM- actually thought this was going to be taken seriously.

A twisted part of me wants to think that this was some one's answer to 2001 which was released in the same year, but that's not possible. More likely it was the result of the success of Japanese monster movies (Godzilla)and several co- productions (Fukasaku went on to direct the Japanese sequences in Tora! Tora! Tora!). Ultimately this was just a bad idea all around- fun- but a bad idea.

I'm not sure whether we should thank the Warner Archive for putting this out or curse them. I'm guessing it will depend on your feeling for men in silly monster suits. If you like grand silliness give this a try. 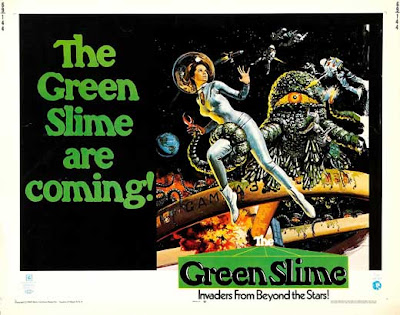