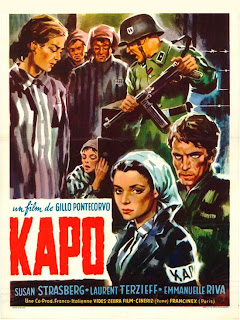 This is a dark and controversial story of a young Jewish girl who is carted off to a concentration camp. There she manages to escape death in the gas chambers with the help of fellow inmates who manage to give her a non-Jewish identity of a recently deceased prioner. Willing to sell herself for food she manages to form relationships with some guards and eventually manages to become one of the kapos, inmate guards. Eventually she is talked into helping with a mass escape attempt.

Made at a time when you didn’t really show the camps, this film is a full on look at what it was like in the camps. Life is brutal and nasty and people are not always all that nice (as opposed to many other similar films) since the need to survive had taken over. To be certain we don’t see all of the horrors of the camps, but we certainly see more than filmmakers today are willing to show. Life is more than the yard, the beds, the gas chambers and the crematoria.

Controversial in its day for it’s frank depictions, the film still packs a punch. There is something about it that hangs with you in away that many other Holocaust films don’t.

The film isn’t perfect and the passage of time has lessened some of it’s impact, thanks to a cast that seems to be a bit too well fed and over made up (many of the women have eye make up on). The plot is also more than a tad soapy with our heroine’s course, including romance, seeming more contrived than natural. I’m guessing that the soap was necessary in order for the audiences to accept what happened (I mean Jacques Rivette apparently objected to the shot of a hand on an electric fence)

I like the film, but I don’t love it. I think that time in some way has moved us past the film. Yes its stark and jarring and upsetting, but there is something about it that has shunted it into a side track of film history. There is simply something about it that is less than it should be. If you want proof, consider that the film has only been released as part of Criterion’s low cost Essential series which releases films cheaply in non-tricked out editions (though to be perfectly honest this is one film that really needs to have extras to put the film into context.)

Reservations aside you really should see this film. It will, in its way curl your toes.
Posted by Steve Kopian at March 13, 2012