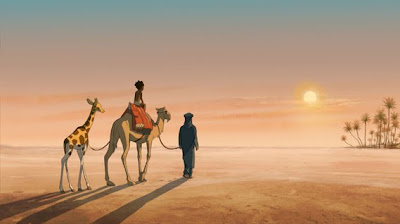 This, along with Le Tableau, was supposed to be Rendezvous with French Cinema's attempt at reaching a family audience but the audience attending the first screening of the film was entirely adults. Why? Because all the families were attending the New York International Children's Film Festival which was better promoted to families to the point that the IFC center was filled with parents and kids attending the NYICFF's screenings....

Its a fact that annoys the hell out of me because once the cows go sky diving this film is great.

The plot of the film has a grandfather telling his grand kids the story of Maki, a young boy who escapes from slave traders, befriends a giraffe (the title character), crosses the desert, meets a pirate, and a few other things on a trip that takes him from Africa to Paris.

Told in beautiful animation that often reminded me of what Chuck Jones in his Riki Tiki Tavi days might have done had he worked at Disney, this is a really good film. Actually the first half of of the film is just okay, however right about the time the characters reach Alexandria the film starts to get good...and then about the time the cows sky dive this film begins firing on all its cylinders and becomes moving- so much so that when one character is shot the small audience gasped loudly.

This is a hidden treasure of a film that deserved better than to have been counter programmed with the NYICFF.

See this film. Its a treasure...Details on the next two screenings here. 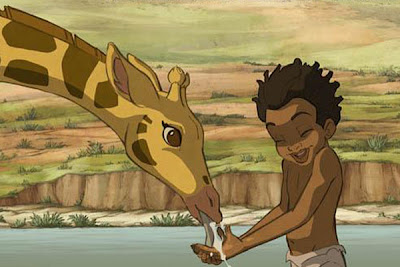