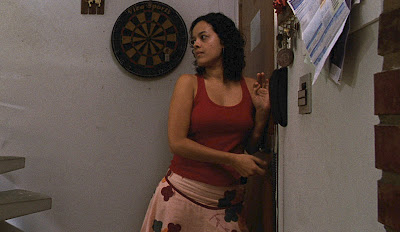 What in the hell is this film all about?

The film shows life on a street in a city in Brazil around the time that residents agree to pay for private security. We follow the security guys, a guy who sells apartments in one building, his girlfriend, his uncle, his cousin breaks into cars, their grandfather who owns many of the buildings on the block, and a family in one of the buildings who are driven nuts by a barking dog.

The film is told in three parts that move the characters over the course of several months.

The film falls apart in the the third part. It's here that the film begins to flail about in all sort of directions making you wonder what the director was thinking.

What do I mean by flailing about?

We get a sequence where one of the security guys ands the grandfather's maid go into a house and have sex. There is a shot of some one walking by a door in a supposedly empty house that caused the audience I saw this with to scream and jump with a greater intensity than most horror films. What does this have to do with anything? I have no idea since its just one shot that is never referenced again- despite the camera moving to capture this key event.

We get two horror movie like dream sequences, one involving a shower of blood and an another involving a bunch of people leaping over a wall and congregating in a hallway. Do either mean anything? Your guess is as good as mine.

Then you have the ending which is best described as out of left field. Its a scene where a conversation between the grandfather and the security men talk about something we've never heard referenced before and it implies something terrible except the film cuts away to the dog family setting off firecrackers and a black out.

There is no resolution, no anything just more threads. I wanted to yell out - YOU HAVE GOT TO BE KIDDING. but I held my tongue and just watched the audience flee.

Personally I want to smack the director upside the head. He has a great cast, some interesting plot threads, and then he tosses them all out the window.

What was he thinking?

No clue. After the screening I read the press notes which told me nothing- other than they talk more about the barking dog than the film does.

What a waste. Two hours of my life gone for a film that ultimately means zippo.