The New York International Childrens Film Festival starts tonight. As this posts I'll be on a train to the Opening night celbration. To celebrate I had wanted to post a review of one of the films coming up. This was supposed to be a review of one of two films they are screening either Lotte and the Moonstone Secret or First Position but there’s been a bit of a cock up and crossed wires and we blew the publication deadline. Its my own fault, partly because the I couldn’t get Lotte’s guest reviewer, Avery Grace to complete her review (what can I say its hard to get a toddler to work under a deadline).

Instead I’m going to say a few words on a couple of films that we’ve reviewed previously and which still have tickets available. 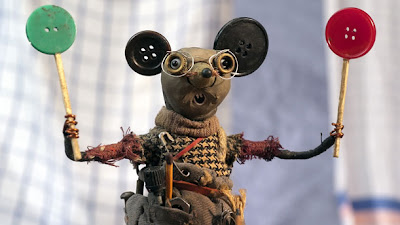 Toys in the Attic is the English language version of In The Attic or Who has a Birthday? This played the NYICFF in 2010 and was a film that has stayed with me ever since. The plot of the film is best described as Princess Bride meets Toy Story, as the discarded statue of a political leader plots to get his hands on the beautiful Buttercup. His minions steal her and take her back to their side of the attic. But Buttercup’s friends plot a rescue.

This film is pure joy.

Its old school magic as Jiri Barta animates all the dolly, toys and bric a brac one frame at a time.

I have not seen the English dub, they canceled the screening I had tickets for due to conflict, but unless they radically did something wrong this film should rock. It’s a film that elicited audible murmurs of delight when I saw this two years ago. I expect the same thing to happen when this screens on March 17th. 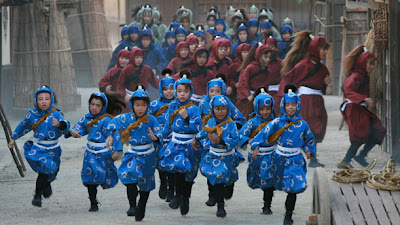 The other film you need to see is Ninja Kids!!!

Unless you haven’t been paying attention I have a weak spot for this film. (I’ve been posting pictures at every opportunity).

Based on a Japanese anime and manga series, this is the story of a young boy who is sent by his father to ninja school. Once there he meets a wild assortment of students and teachers.

Made by master director Takashi Miike and aimed firmly at the kid in all of us Ninja Kids!!! was one of the joys from last years NYAFF and of the film year in total. To see the film is to become six years old again. I laughed from start to finish.

Filled with humor that works on multiple levels this is a film that I’m guessing parents wil love as much as their kids, mostly because they’ll understand all of the jokes.

See this movie, trust me, this is one of the best undiscovered joys of this years NYICFF. Its screens tomorrow at 6 and on March 24th at Noon (thats where I'll be)

(I should probably warn parents that there is some cartoon violence in live action form. Actually the whole film is a live action cartoon- possibly one of the best live action cartoons ever made so it’s not surprising. I should also mention there are some jokes about poo, farts, snot and other bodily functions but since the film is about little kids it isn’t really surprising either)

For tickets and information go here.

And look for reviews from tonights and tomorrows screening over the course of the next 48 hours.
Posted by Steve Kopian at March 02, 2012

Email ThisBlogThis!Share to TwitterShare to FacebookShare to Pinterest
Labels: nyicff 2012