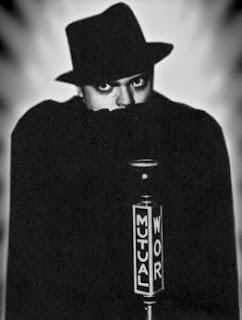 In the early 1930's before the The Shadow was Lamont Cranston, an international man of mystery with the power to cloud men's minds, the shadow was the basically a voice on the radio who told mystery stories about how crime didn't pay. The character then moved over to some of the pulp mystery magazines (or was it the other way round?)

Anyway along the line Universal made a series of short films with the character. The films ran about 18 minutes each and told a story lifted from one of the mystery pulps. I had the good fortune to run across a DVD at a nostalgia convention recently that had a disc of three of the six shorts.

A Burglar to the Rescue tells the story of a bank president who calls his flapper girlfriend to the house to say that the money he's been spending on her, the banks money, has run out and that in order not to get in trouble with the bank examiner they have to flee. She wants no part of it and instead leaves, leaving him to plot what to do. Its a weakly acted story of a man in too deep to a gold digger


House of Mystery tells the story of two hunters who seeking to get out the rain go into a cabin in the woods, only to find a woman on the floor of the cabin who appears to have been beaten to death. What happens after that is the story, and frankly it's not what you or I could have expected. Definitely an interesting little mystery tale.

Circus Show Up is the story of what happen when the lights suddenly goes out when a trapeze artist is doing her routine and falls. As the police and the circus detective investigate we quickly find out that it was not an accident. A good little triffle of a film, its the sort of thing that you'll enjoy while it's on, and remember fondly, but not need to see again.

These films don't officially have a release but now that they have resurfaced and have been shown at a pulp fiction convention there is a good chance they might. However there is an unofficial release from Sinister Cinema of three of all three shorts and it can be purchased here.

(The photo is of Orson Welles from his time as the Shadow on the radio, which was several years after the shorts were made.)
Posted by Steve Kopian at March 01, 2012