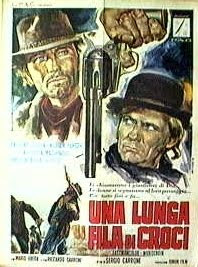 No Room to Die(1969)
Two bounty hunters battle each other and some men running cheap labor across the border from Mexico. Some sources list that the two main characters are supposed to be Django and Sartana however in the dubbed version I saw they were not referred to that. There also didn’t appear to be any mention of those names by the actors on screen (there is a Sartana however he is killed early in the film). This is a good little western that’s not bad as long as William Berger’s Preacherman and ANthony Steffen‘s Johnny Brandon are on screen, but which slows to a crawl as we spend too much time with the villains of the piece. Berger and Steffen show why they were stars of the genre managing to wander through the rest of the nonsense with a swagger that shows them clearly in charge. Berger in particular, dressed all in black and carrying a seven barrel shotgun, is particularly menacing. When the action comes, in particular the long section at the end which is a series of shoot outs, the film is quite good. Worth a look if you should run across this in one of the many spaghetti western collections. 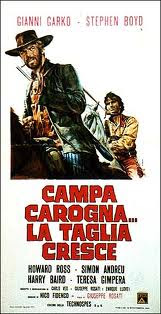 Charge (1974)
Stephen Boyd and Gianni Garko (the original Sartana) team up in the story of a group of soldiers and a bounty hunter (who is a parasol carrying Muslim) tasked with stopping a bunch of bandits who are hijacking wagon trains and stealing all of the guns. solid typical story told with just enough new shading(Garko is hysterical as the bounty hunter) that it keeps you watching.Actually what it does is worms you're way into your mind and makes you tell everyone about the film. Is it really the best film ever to come down the pike? oh certainly not,but it is damn entertaining and unique enough to stand out. Recommended.
Posted by Steve Kopian at March 18, 2012