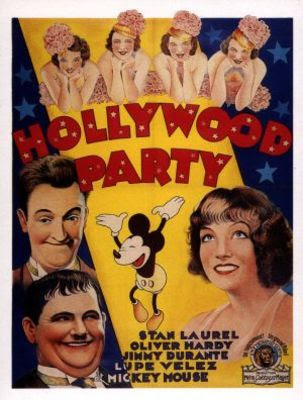 To celebrate the up coming release of his latest Schnarzan movie Jimmy Durante throws a huge party...

This is one of those films that was only possible with a studio system, namely there was no way you could get this many stars into one film without it.

This is also a film that is more a collection of great bits rather than a cohesive whole. Its more like walking around a party and stumbling into nonsense. Its a mix of comedy bits, wild musical numbers full of trick photography and animation. Almost all of it works, but not all of it connects to anything.

Yes Mickey Mouse does a bit with Jimmy Durante which leads into a film called Hot Chocolate Soldiers which is one of the creepier things that Disney ever did. I've heard that the Mickey Mouse portion of the film was missing for years because of legal reasons.

I like the film. Its a film that I first tracked down after my mom died after I had heard about it. I had to get it on VHS because until the recent Warner Archive release that was the only way to get it. It arrived on Christmas Eve and it was a film I used to help get through a really crappy holiday.

My favorite part is the confrontation, late in the film, of Lupe Valez and Laurel and Hardy. I makes me sad that they were never allowed to make features together because I really think the pairing clicks.

If you're an old movie fan you owe it to yourself to pick this up.
Posted by Steve Kopian at March 30, 2012