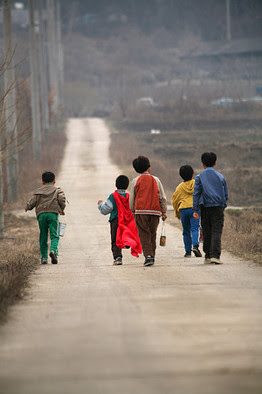 Based on a real mystery called "the frog-hunting boys case" Children... tells the story of what happened in the aftermath of the disappearance of five boys who vanished when they went off to find salamanders. What happened to the boys remained a mystery, despite a massive search, until eleven years later when their bodies turned up.

In reality the case remains unsolved and is considered closed because the statute of limitations has run out. However that hasn't stopped speculation and media interest which, according to what I read in researching the film, has never died down.

Media interest in the story is the jumping off point of the film. The story begins with the boys disappearing and the massive search. Things are so frantic that a variety of means of trying to locate them are used, including psychics. The grief stricken parents are thrust onto TV.

An award winning documentary filmmaker is called on the carpet by his bosses about how he cooked things on his latest film. They warn him not to do it on his next job. Stumbling upon footage of the search the filmmaker starts investigating, and eventually finds a partner in a psychologist who thinks that maybe one of the boys fathers did it (shades of the West Memphis 3). However things are not as they think and nothing can be proved. When the bodies are finally discovered a decade later, the producer is once more off on the trail of a killer.

A good if very uneven film that raises some interesting issues about how we view media hyped cases and how we need answers. The film works for most of it's running time as we watch how the producer goes about investigating things and how speculation can go sideways. There are many wonderful scenes in the early part of the film as possible solutions are brought up and one of which is suddenly seized upon as right, even though its clear the proof is tenuous.

Unfortunately as we arrive at the discovery of the remains, the film begins to misstep. In a desperate effort to provide a solution an entirely fictional character is brought in and chased down. Its an odd shift in the film in that it feels like another film has been grafted into this one because the filmmakers didn't really have any answers. Its not bad, but it rings rather hollow especially when the film concludes with some heart breaking scenes when the parents at last can view their lost loved ones.

Don't get me wrong, I do like the film, it's just that there is so much real material here that I can't believe they didn't mine more of it, or even trust it enough not to add some fictional twists. I suspect that the unevenness is the reason that the film hasn't turned up on American shores yet.

Ultimately it's worth a look if you can rent it or if it should turn up for free at the Korean Cultural Service screenings. 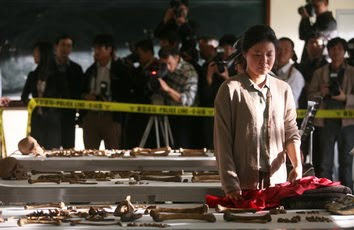