Revisting Little Pond aka The Bridge at Nogunri 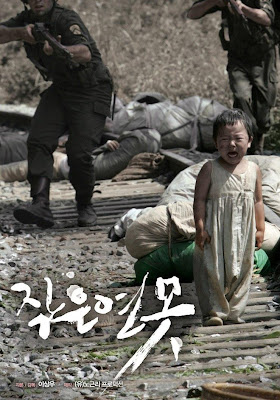 Its got a cliche set up- we get to know the various people who all live in a village in Korea. They are all happy people. They are all played by various Korean movie stars of the highest level.

It is often on the level of a very good TV movie that was done a tad too cheaply and so uses CGI blood.

It is also one of the best anti-war films you will ever seen and mess you six ways to Sunday.

No, this film will affect you.

When I first saw this film at the New York Asian Film Festival in 2010 there were screams and shouts. Several people got into a very heated argument as the film's credits began to roll. The screaming and yelling continued into the lobby where everyone was ejected just as things seemed to be on the verge of turning physical. Those of us not involved in the screaming match just staggered out into the day light emotionally broken and somewhere past words.

I was so shaken by the film that it colored everything I saw after it at the film festival.

The film is the true story of what happened one month after the Korean War started. Everyone in a small village was ordered to leave because they were in the way of the invading North Korean Army. As they made their way to safety they ran into the advancing American Army. Through circumstances explained in the film all but 25 of the villagers were killed in a massacre. Its a horrific tale that remained covered up for decades. It was also, unfortunately the first of many, similar incidents that occurred during the early days of the war.

Seeing the film again for the first time in two years I was again moved by the film. While I was not driven into a deep funk as I was the first time, I was still moved. This is a sad and sorry chapter of history that we in America know almost nothing about. Its a story that sadly has parallels with the wars we are fighting across the globe today (a fact that sparked the heated out burst at the NYAFF).

This is a film that works simply because the story is so powerful that we can't help but be moved. The film doesn't shy away from the facts and as such we see see men women and children die through the fear of soldiers and because everyone has a different way of handling the situation. The villagers are only following the orders of the local officials, who were not in communication with the army, who didn't know how to handle the Koreans they met.

As I said at the outset the film is imperfect, but the film over comes its short comings to shattering affect.

As I've said before see this film because you owe it to humanity to be ready to prevent something similar from ever happening again.

(The film played the New York Asian Film Festival as Little Pond but has been released on DVD as the Bridge at Nogunri. Beware some import DVDs since the English subtitles are not particularly good) 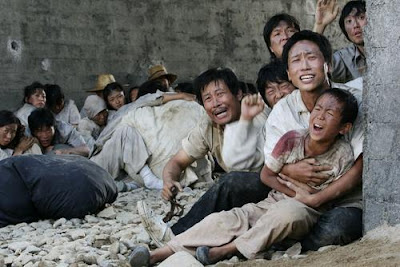