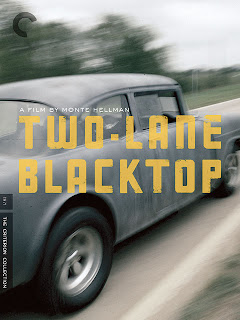 Danny Peary in the first volume of his Cult Movies books tells the story of how Esquire was so impressed by the screenplay published it and proclaimed the film, sight unseen as one of the great films of the year. When the film came out things got embarrassing as critical response was muted and the film bombed in theaters.

During one of Barnes and Noble's recent 50% Criterion Collection sales I picked up their two disc deluxe set because I had never seen the entire film and figured for 20 bucks it was the way to go.

What was I thinking?

The plot of the film has The Driver and the Mechanic picking up the Girl on one of there stops between road races. The eventually end up racing against a character called GTO in a race to Washington DC. However they begin to lose interest and as the girl shifts interest from character to character the men just prattle on with each other before the race is forgotten and the Mechanic and The Driver go back to their life street racing.

Part of the problem is that none of the characters are particularly likable. The Mechanic and the Driver are so self absorbed and focused on racing they quickly bore you. I've read many pieces on the film saying that the authors of the reviews know people like this, but I doubt they would consider them friends since they would be too dull for words, unless you shared their mania. The girl is simply shrill and annoying. As for GTO he's really just a jerk.

The problem with the characters is that three of the four leads can't act. James Taylor, Bran Wilson and Laurie Bird are terrible. Watch any scene and you see how they are obviously trying to act...though in Taylor's favor he does come off as very close to how he is on stage when he performs his songs.

I don't get it. Whats it all about? The alienation of America? Yes and? I know this, its been done before and better.

Yes I know that some people love this film, but I can't find any. I was hoping that something in this super special Criterion edition would clue me into what is so great about the film, but to me it's a lot of very smart people talking about a very dull and obvious film as if it held some secret of the universe...except that there is no hidden secret it's so plainly in view that you can't believe that these smart people think it's hidden.

You may want to try this and see how you feel, as for me, this is an okay film that is wildly over hyped by its fans.
Posted by Steve Kopian at March 12, 2012