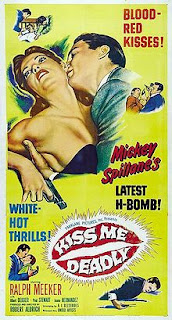 Criterion brought out the Robert Aldrich classic film in a nifty little package with a bunch of bells and whistles. I jumped at the chance to see it again and picked it up when Barnes and Noble had a 50% off Criterion sale.

Sadly the film didn't live up to my memory.

The film has PI Mike Hammer rescuing a woman who is running down the a desolate road. She's clearly in trouble and its the sort of trouble that leaves her dead and Hammer in it way over his head. Hammer survives the initial attempts on his life and then spends the rest of the film breaking heads while trying to figure out why everyone wants him dead and what they think he knows (not to mention trying to find a big pay day).

Kiss me Deadly is best known for one thing, the glowing box that influenced Alex Cox in Repoman and Quentin Tarantino in Pulp Fiction. Its a film that has Ralph Meeker breaking heads and looking good. Its a form over style film where everything is about amped up brutality.

As form over content films go this is a pretty good. It looks good. It had great locations all around LA and it has a hip attitude with a hero that has style to burn, lets face it Hammer looks good beating people up or even getting beaten up. He is the very definition of a tough guy.

Unfortunately if you want a movie that makes sense or that is more than good looking you're in for trouble because honestly the plot kind of bites.

I don't blame anyone other than Mickey Spillane simply because his books, the ultimate source of all the Mike Hammer TV shows and movies, are truly terrible.

No, they are. They are horrible. If they weren't filled with sex and violence at a time when books didn't have that sort of thing, Mike Hammer wouldn't be a house hold name. Seriously Spillane didn't write, he typed, and did so badly. I'm not going into the literary demerits of the books, but they really can't be read as anything but camp, and bad camp at that. Hammer is a knuckle head who never solves a crime, rather he simply keeps beating people up until someone tells him something he needs to know. He kills a problem, he doesn't solve it.

There is a reason that Spillane never really was a mega star author past a certain point, because time moved past him. Sure he sold books and was on TV shows and in commercials, but I suspect that had more to do with him being a personality rather than his prose being any good.

Yes, I despise the books and several of the films made from the novels. The closer they are to the books the worse they are. Kiss Me Deadly on the other hand isn't a bad film. I'm not too sure how close to the book it is but having seen an interview with the screenwriter I know changes were made, which make the film work. My objection to the film is that many people say its one of the best hard boiled films or one of the best noirs, I would beg to differ.

The problem for me with the film mostly lies with Meeker's Hammer. I don't think the there is anything wrong with Meeker himself, my problem is that Hammer doesn't really do anything so much as fall into things and fight his way out of them. To my mind he's rather clueless through most of the film. Why should be care about anything he does when he he does is act as a bulldozer.

Danny Peary in his Cult Movie books talks about how Hammer is a fascist and how the point of view of the film is that the world is going toward a totalitarian state. Perhaps he's right, on the other hand I think he was reading way too much into the film. I think its just a exercise in brutality.

(A digression- I had a long discussion with a friend of Mondocurry's who grew up with Sam Raimi and his brother. He was amused to read about how critics read into Raimi's films how certain things, say the use of Three Stooges silliness means something deeper. Knowing Raimi, and having worked on his childhood films, he realized that the things critics believe are deep and meaningful were simply copying something they liked growing up)

As for Kiss Me Deadly, it's a good film, it's not a great one. I think it's over sold as being deep and meaningful, when I think it's just mean and nasty. Don't get me wrong , I like the film, I own the film, I'm going to watch the film again, I just think it's over hyped as being great, in anyway other than in retrospect.
Posted by Steve Kopian at March 16, 2012