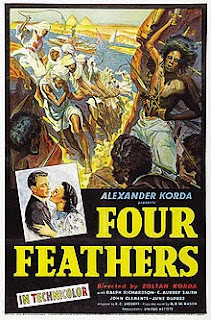 Alexander Korda's film version of the oft told tale of perceived cowardice and true heroics has been lovingly put out by Criterion.

Harry Faversham, son in an aristocratic family resigns his commission on the eve of his unit heading into the Sudan. Its taken as an act of cowardice for which he is given four white feathers. However when his friends are overwhelmed and captured by the enemy Harry goes in disguise to rescue them and there by return the four feathers.

Grand adventure that is exactly what they talk about when they say they don’t make them any more. Yes its been remade several times (quite well) since, but this is the real deal. This is one of the best adventure films you’ll ever run across…

Okay time to fess up. As good as the film is, I hate the first half of the film. I’m not going to lie until Harry heads off to rescue his friends this film bores the snot out of me. Its all way too formal and very very British in the stiff upper lip sort of way that is so easy to make fun of. After that the film is a rip roaring adventure film about friendship and true courage. This is the part that any movie goer worth his salt should see.

If you’ve never seen the film you should. If you’ve only seen either the Heath Ledger or the Beau Bridges version you should see this one as well. Frankly if this film wasn’t so much fun, you never would have gotten those remakes. This is old school adventure before the world exploded and reality began to tinge everything we see on screen. (and it’s more proof that maybe, just maybe 1939 was the greatest year in film history)
Posted by Steve Kopian at March 14, 2012