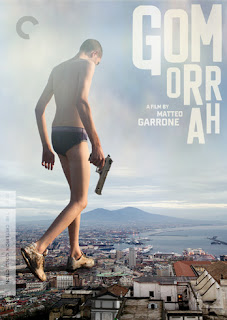 I originally saw Gommorah at the NYFF the year that Alice Tully Hall was being renovated and the whole kit and caboodle was being run at The Ziegfeld. I mention this simply because where we sat seemed to be farther back than sitting at the back of Tully Hall which is a HUGE space. This change also put Lou and myself in front of several older ladies who were out on a jaunt to see a good movie- and since it was at the NYFF it must be a good movie- only they had no idea what they were seeing and were horrified by the violence (real and implied) and confused by it's disjointed nature.

Gommorah is based on a book by Roberto Saviano about the Italian organized crime group called the Commorah which operates in and around Naples. The book is a scathing indictment of the organization, and to a certain degree the populace that allows this group to run roughshod over everyone and everything. The book was so damning of the criminals it drove its author into hiding in protective custody. I read the book and was depressed for days afterward. I actually gave my copy of the book away since it’s portrait of entrenched corruption is disheartening in the extreme.

The film is based on five short passages from the book, some as sort as a couple of lines, others are only a couple of pages. While the book is deserving of a real TV miniseries, the film is a wonderful taste of the poisoned souls that are the Commorah.

The five stories we follow are: A money man who gives pay offs to the families of Commorah members in prison; a dress maker who decides to make some extra money by teaching the Chinese to sew; a young boy who decides to join up with the group; a man who is burying toxic waste; and finally two dimwits who think they can be as tough and mean as the big boys only find out real fast that they are flies to be swatted.

It’s a sad sad portrait that says a great deal about the moral decay of today's world. Especially telling is the toxic waste dumper who is using the land of his forefathers to make a profit today by poisoning the children of tomorrow. While it’s clearly a metaphor for something bigger, it’s also just a horrifying revelation that is unpleasant on a visceral level.

This isn’t to say that the film doesn’t work on a less deep level. The sequences with the tailor are often funny, as is the sequence where the young boy is taught to deal with the pain of getting shot…by getting shot. The story of the two dimwit wannabe gangsters is also amusing as well until the laughter of how stupid they are, catches in your throat with their ending (That’s not a spoiler you’d have to be a fool to think they met with anything other than a really bad end).

Gommorah is a masterpiece of a film. It’s a perfect antidote for anyone who thinks that the Godfather and Scorsese gangster films are the life or something to aspire to.