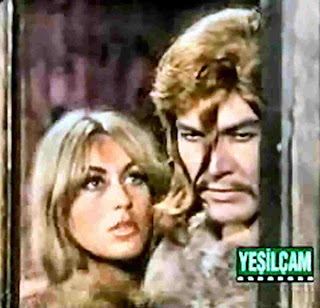 Kartal Tibet plays Tarkan for the last of five (to my knowledge) films called in English Tarkan and The Armless Hero.

(As with the previous Tarkan films I watched this without benefit of English subtitles, so details maybe sketchy) The plot of this one has Tarkan in the Orient. The film begins with a bad guy swordsman entering a town and everyone fleeing. He kills a good number of men at a dinner then storms off. Tarkan arrives at an inn (we know its in "China" because of the lettering on the signs) and orders dinner. A woman in distress arrives and Tarkan helps her out by beating up enough men to fill out a large army. Leaving the inn separately, both Tarkan and the girl are caught by the same people (Both the ones he beat up and the ones that capture the each of them). Tarkan is forced to overcome some great trials before winning the release of himself, the girl and some men making a delivery of a sword. Tarkan and the men deliver the sword to a monastery but end up being attacked by the bad guy from the beginning and his men. From this point on its a series of pitched battles between the two sides.

Say what you will about Turkish Cinema they have turned out some real gems. The film makers have this knack for making wild action films that blend a variety of styles together to make an entertaining movie. Here the film makers have taken the sword and sandal/costume drama and blended it with a martial arts film. If you're thinking that you didn't know that there was a large population of Asian actors in Turkey, you would find yourself correct in your assumptions, there aren't. The producers covered over this by putting any Asians tend to be toward the front of any scene, with squinting non Asians behind them (and lest anyone doubt they are Asian they have what I can only describe as Asian style facial hair). Its a scream. Even more wacky are the fight sequences. Certainly the sword fights are even more outrageous and wonderfully silly than before. However the real jaw dropping "I can't believe this/oh my god this is so dumb its fun" moment comes when you realize that since this film is set in China (or where ever) that most of the fights will involve some form of martial arts (I say some form since anything anyone does was clearly learned from the movies). The actors may not be able to do real martial arts, but damn it they are going to try, and amazingly it it some how works (in a jaw dropping I don't believe this sort of way).

I liked this film. It just goes from start to finish with out a great deal of extra baggage. It also takes a few twists and turns that were completely unexpected (I loved the trials) which liven things up as a result. Its a pure action film, and on that level it succeeds.

However as fun as the film is its clear that the Tarkan series had run out of steam. The addition of martial arts into the movie was a one shot deal and clearly couldn't have worked a second time. The mostly action format of this film appears to have been at the expense of most of the characters who have nothing to do but fight. You got no real sense of who anyone is, which was not the case in the previous entries. And you have to worry about a series that has to resort to two, yes two, flashbacks for the wolf of Tarkan as a baby (Thanks to footage from Tarkan and the Silver Saddle).

While not the best of the Tarkan film (Vikings and Golden Medallion are better) this film is certainly worth a look if you can find yourself a copy.

(For the record, no one is Armless in this movie, everyone has both arms on their bodies and a good number of weapons as well.)
Posted by Steve Kopian at March 23, 2012