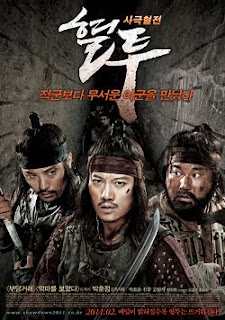 I love that they refuse to do things in what we in the West would consider a normal manner. They steadfastly refuse to follow the path that we we expect. They refuse to be just one thing and one thing only. I know this has made their entry into American (and Western) theaters and consciousness difficult. Simply put the studios simply don't know how to explain/sell them to audiences.

Take for example The Showdown.

I picked this up in Chinatown on a whim. The cover of the DVD was a version of the picture of the poster to the left. I don't know if I had any idea idea what it was about. I some how think that the box had very little English. But I took it home and put into the pile. Then looking for films to review for the Korean Blogathon I pulled it out of the stack and gave it ago because I figured it was an action film.

It is that, on some level, but it's also a couple of other things, social commentary, thriller (of several sorts), a tale of friendship... Its got enough levels that its kind of hard to say exactly what type of film it is.

I vote for a good one and say leave it there.

The film is set in 1610. The Chinese are battling the Korean army, and it's going badly. So badly that pretty much every is wiped out. However two friends survive and the pair staggers off in the snow unsure of what to do. They eventually make it to an abandoned inn where they hope to find shelter. Once inside they find that there is another soldier there, a deserter who fled in the middle of battle. Its at this point things begin to go sideways. In the aftermath of the battle as the questions of how they could survive while everyone else has died, the past begins to haunt the men and we quickly realize that what was once wonderful between the men may have been really rotten...and sometimes your best friend turns out to be your worst enemy.

This is a blood soaked tale that constantly surprises with its twists and turns. Where is it going, what is going to happen next? You'll be surprised as we see the past in a series of flashbacks, that color everything we know. This really is a take no prisoners sort of film. Its the sort of thing that Shakespeare would have had a field day with.

I really like the film. It looks good, it has some great action and it messes with your expectations. It doesn't do what you expect and it's rather cynical.

The film is hard to really write about. The devil being in the details. How we feel about the characters changes as the flashbacks reveal more and more. Most things that I've read on the film simply say that the film is about three soldiers hiding out after a battle only to find that they are deadlier than the enemy. I suspect that the film is described that way simply because it's not really possible to say more than that, I mean I may have said too much in my synopsis, but I think not since its clear very early on that there is a lot more going on than meets the eye.

I really like this film. Its decidedly different than most other films of any sort. I mean that as a compliment. I liked that sitting down to see this film I never felt that I had been there and done that. Sure there were bits that echoed other things but, here as everything is put together it's a neat little confection.

I can't lie and say this is the best film I've seen, but it was one that when I finished I was more than happy not to follow with another one. I didn't need another one.

Definitely worth tracking down.
Posted by Steve Kopian at March 06, 2012