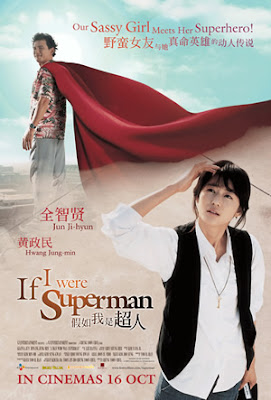 Great iron doors aren't opened by strength but by a tiny key.

A misanthropic producer of human interests stories is looking for a change. She has become a chain smoker and her hair is falling out. As she says early she hates people. After her means of escape, a story in Africa, goes away due to a lion attack she falls asleep in the subway--only to have her bag stolen. Running after it she is saved from certain death by a cute young man... Who is convinced he is Superman. She of course doesn't believe it but then again there is something about his story that makes it seem it's possible.

Bittersweet feel good film is a perfect companion to the classic film The Iron Giant. Its the story of a man who believes he is something he really can't be, and yet he has this affect on people that is rather super.

I'm at a loss for words.

Sorry this is going to be brief because I don't know what to say and because what I want to say will spoil too many things. Regrettably a few spoilers will leak out so you're warned.

At it's most basic level this the sort of film I just want to press into people's hands and say, SEE THIS. IT WILL MAKE YOU FEEL GOOD. Actually in a weird way it will make you feel hopeful. I like that it makes you feel something, wonder, amazement, happy, sad, hopeful... Its a film that plays on more of your emotions than most three films combined.

Okay yes, the film borrows riffs from other similar films, say The Fisher King with it's mad central character born of tragedy, but at the same time the film manages to make you believe that our hero is who he says he is. The film transcends the subgenre and makes us believe anything is possible. It also kicks us in the ass and heart when a choice has to be made and the choice is the same one that a certain Iron Giant makes.

I do need to remind you that I used the term bittersweet, so keep that in mind when you see this. The joy and laughter of the first half gets colored a bit darker in the second, the result of finding out the reasons behind everything and where it takes us.

Ultimately though you will feel hope...

This can be had as an import DVD because I don't think it's gotten any US release. I have no idea why, perhaps a problem with DC/Warner, then again most US distributors wouldn't know what to do with this film.

Definitely worth tracking down.
Posted by Steve Kopian at March 07, 2012