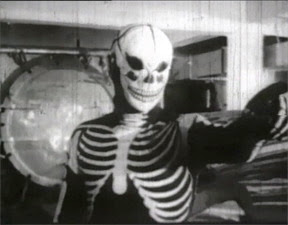 The first Kilink film (Kilink in Istanbul) is a fantastic thrill ride of action sex violence and silliness. When I saw it I sat there with my mouth open amazed at the "throw everything into it the mix" nature of the movie. There was no reason any of it should have worked, but it did in spades. I was so excited by the prospect of seeing another film in the series I picked up a copy of the third film even though it was sans subtitles.

The plot of the film has Kilink, again back from the dead, playing off two bands of gangsters against each other. The police also join the battles once they realize that the super criminal is not as dead as they thought. There are shoot outs, fist fights and seductions in the typical Kilink style as our hero attempts to get whatever he's after this time (without subtitles it was hard to tell what it was). Its a Turkish version of Yojimbo or A Fistful of Dollars.

Kilink: Strip and Kill is a disappointment, or is at least without subtitles. The problem is not that there isn't the over the top violence and behavior, there is, there's just less of it. The problem here is that the film has a good number of scenes with just dialog, where nothing but talk happens. I'm sure had I had a subtitled print this would have played better, but it didn't and I kept wanting to reach for the fast forward. I know that part of the problem is that since the film is also sans supernatural/superhero elements the film seems to be just another gangster film, but with a protagonist in a full skeleton costume. I liked the wild elements of the first film and was slightly disappointment that they weren't here to spice things up.

If you've seen other Kilink films give this one a try, although try to hold out for one with proper subtitles. Its not bad, its just hard to follow with out them, hence my rating of six. I know that should I be able to find a subtitled print I will be very happy to try this again.