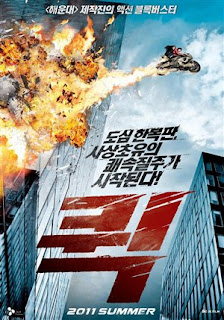 I was talking with Randi recently and she said she hated that since I've been writing for Unseen I've stopped writing reviews of films that were bad. She missed when I would rip films to shreds...

...well in honor of the Korean Blogathon I decided to say a few unkind words about Quick.

If you've been reading the blog for any amount of time you know I love Korean films. I love it when they hit the target and create magic. Unfortunately when they miss, oh lord, they miss big time. In the interest of fairness, when all of the Internet will be talking about the joys of Korean film, I present a review of Quick as a cautionary tale.

Touted as coming from the makers of Sector 7 (a monster movie with a great monster, good mayhem in the second half, but too much computer generated imagery and a bad script) and Haeundae (a complete waste of a film that is only saved by a tidal wave in the closing minutes), this film is proof that if you're seeing being promoted based upon earlier films that are turds you're going to see a turd.

This film is a stinky turd. I've seen over 200 films in 2012 so far, and this is one of the three worst ones I've run across. It's the worst of all things a time waster.

The plot of has a motorcycle messenger becoming the instrument of destruction of a bad bomber. It seems the bomber doesn't like our hero and is using him to deliver bombs around the city. To make sure he does as he's told the bomber has put a bomb in our hero's helmet, which unfortunately has been put on by his ex-girlfriend, who now has to travel around with our hero lest she lose her head.

Forget logic, forget reason, this film makes zero sense. Nothing that happens makes any sense. The why and hows are simply there to get us from the next stunt or explosion.

Shall we talk about the action sequences?

I really hate them. Shot as many Korean action films seem to be these days with an over abundance of computer enhanced graphics (watch the end credits and you'll see how much green screen was used) the film simply is trying to look cool and look spectacular. Say what you will about Transformers director Michael Bey and how he shoots his action sequences, he has nothing on the director of this film who pushes things to the point of ridiculousness by showing explosions and crashes over and over again from every angle. I would say that it was done to fill time but this film goes on and on for almost two mind numbing hours, and they onlycreate an over length.

I kept thinking:When is it going to end?

Not until they've blown up every car in South Korea...not to mention several buildings, a few buses and a train car or two.

Unfortunately the sequences are so CGI heavy and badly staged that you never believe any of it or feel any tension. When our hero leaps his bike off a bridge on to the top of a moving train you can see him land on a platform as he goes off the side of the train car. He lands on an odd angle and in the next shot he's in a completely different position. Its beyond mismatched.

And every bit of mayhem looks perfect. Even some one like Michael Bey or Steven Spielberg doesn't make every single explosion, crash, stunt look beyond picture perfect every time. Quick does. Every explosion is so perfect as to be unreal.

As for characters there really aren't any. Sure there is some attempt at creating them via flashbacks, but mostly this is just some good looking people running around trying not to get blown up. Ultimately they aren't characters, they are cardboard cut outs.

I like stupid movies. But there is fun stupid and then there is this, the wrong sort of stupid. Its a film that is all about looking cool at the expense of everything else with the result is there are no characters, there is barely a story, and there is no believability.

I really hate this movie a great deal.
Posted by Steve Kopian at March 10, 2012

Email ThisBlogThis!Share to TwitterShare to FacebookShare to Pinterest
Labels: action, korea, korean blogathon 2012, not worth the effort