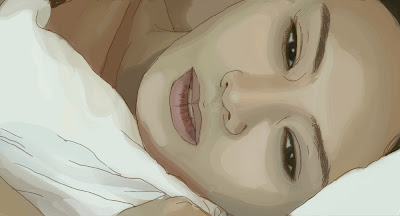 I picked this up in a dollar bin in Chinatown. I had no idea what it was, but bought it blind, as I frequently do with dollar movies. In all honesty I had no idea what the film was on any level; I didn't even know what it was called until the title appeared some ten minutes into the film.

This is the story of three friends who meet after ten years. One is a loud mouth ladies man who became a cop for the perks, such a bribes. Another is an English translator for a Korean basketball team and its American players. The third is a teacher working on his doctorate. They are all not quite what they seem and all have been banged up when it comes to love. Things become complicated for everyone, and old feelings are kicked up when all three fall in love with the same woman.

A rotoscoped animated film in the style of Waking Life or Through a Scanner Darkly, I'm kind of puzzled as to why they bothered to take the time to do it. With Waking life, the animation creates a dream like effect, and in Scanner Darkly the film creates an other worldliness that the film called for. While it's put to good use in a few sequences for the most part this film didn't need to be animated. The simple story of three friends and their romantic misadventures kind of gets lost in the animation and occasional whimsy. Worse the animated image sometimes seems to muddy what was probably a simpler live action image.

The animation aside this film kind of blindsided me, as many Korean films do simply because it did what it wanted to and to hell with Western conventions. The opening sequence, with one of our heroes being a loud mouth jerk on a plane, kind of turned me off to the film for a while. I braced myself for a rude comedy. Then we got introduced to the other characters and I found that the stories of the guys and their misplaced romances and their lives that have gone sideways made me start to like the film. There is something about their lives that struck a chord. Here was something out of the ordinary, even by the standards of the Korean films I've seen. Here is a very good romantic slice of life.

I know that most Korean films are never noticed by the people around the world. If its not action or horror, or an occasional drama, most Korean films don't even have a chance of a US release. If you get a good romantic drama, especially one that has an atypical presentation, like animation, it's not going to get noticed at all. I'm really not surprised that I never heard of this film before I picked it up in a bargain bin, not because it's bad, rather because it doesn't meet our expectations of what a (Korean) film should be. Its a small gem that's gotten completely lost, which makes it exactly the sort of film that Unseen Films was set up to highlight.

Is this a great film? No
It is however a good film, that has unfortunately gotten lost in the shuffle of filmdom both here and elsewhere.

This is a film to keep an eye out for. Odds are you're going to have to be like me and find it in a Chinatown, or Koreatown bargain bin.

Worth a couple of bucks, a bag of popcorn and a soda. 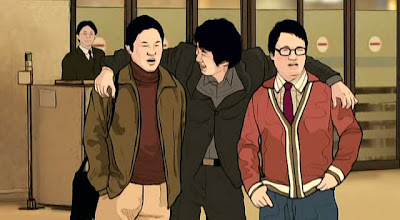