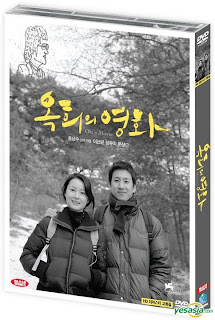 From Director Sang-soo Hong comes a small little trifle that some how ended up at the New York Film Festival in 2010. I say somehow, because while it's not a bad film, rather it's not one of the director's better films, I much preferred Hahahahaha which was released before this.

The film is a series of four inter-connected short films telling the story of Oki and the men in her life, with the final film, Oki's Movie, being her take on the events that we just saw transpire in the previous three films. I've read that the films will work on their own, but I'm not sure about that.

Actually I'm not sure about the film as a whole. The whole romance of Oki with teachers and students didn't work for me. There is something about it that misses. I'm not sure what it is, but I find it kind of like the discussion between the audience member and the film director at the screening that ends the first segment. She's pressing to know about something personal that he says he doesn't remember. While the question works in context of what we saw, it also is a big WTF for the people around them since it's all too personal.

For me the film works in fits and starts. There are many moments that are on target, the end of Oki's Movie (and hence the end of the whole film) feels right. The trouble is that much of the rest doesn't quite work, with much of the humor not being as funny as it could have been. Actually its the sort of humor that struck me as being intellectually funny but not the sort of thing anyone would laugh at.

Okay, you're probably wondering if I'm so bland on the film why in the hell am I reviewing it, because I've talked to some people who found it very touching and right on target. Being the sort of person who trusts my friends opinions on films I'm going to err in the direction of posting this as an ambivalent review. I don't get it, but some people claim they do so I'm going to throw this out there as something you might like to see. Personally I'd go for the directors Hahahahaha over this but that's me.

Currently out on DVD
Posted by Steve Kopian at March 11, 2012