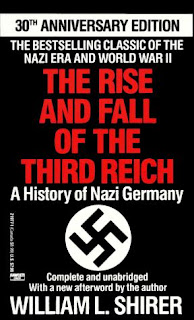 Amazing documentary about the rise and fall of Hitler and the Nazi's.

Actually this look at Hitler and the rise of the Nazis started its life as a book by William Shirer. The film was turned into a three part television documentary that was sponsored by Xerox. The three hour long parts (well,51 minutes each) were cut together and released to theaters. The first time I saw the documentary was as a special TV presentation when I was a kid. It was a big to do and my parents let me stay up to watch the whole thing since the end was going to be well past my bed time. As far as I know until the Warner Archive released their edition the only way to see this was the feature version,which the only way I saw it after that first viewing.

Covering all of Hitler's life the film is a rock solid introduction to the man and his times. If you want to know the basics this is the place to start. While the film doesn’t cover every little detail, it tells you enough that by it’s end you will have the basics of what happened and why. It also makes several other points that tend to be glossed over by later films and books, in particular that the government in Germany was forced to take the blame for the surrender at the end of the First World War. The ones who were largely responsible was the military, but they wanted to remain spotless so they set up some myths. The film further goes into the backroom deals and private manipulations that put Hitler in power.

One of the things I like about the film is that it doesn’t seem to be full of the same old footage. Its not the same pictures of Hitler and the henchmen, much of the film seems to be reasonably unique or used in a unique way. The sameness of footage is what kills many other documentaries on the various wars. I don’t know about you but if I have to sit through the same old pictures over and over again I tend to drift off, not because the material is bad, rather because I’m filled with a sense of been there done that. Rise and Fall is never been there and done that.

Also working in the films favor are the interviews, these aren’t the same people we’ve seen a dozen or so times before. Not only do we get time with Shirer, but we all so get interviews with people who knew and interacted with Hitler. Unlike many later documentaries, say the wonderful World at War, these aren’t just soldiers from the trenches, rather these are the people who rose with the Nazis and eventually broke with them. We’re hearing what happened from people who really were there.

If you want the basics of the Second World War in Europe see this film. If you already think you know everything but have never seen this film before see it.

(Apropos of nothing, I had a friend in grammar school who’s favorite book in the world was the Rise and Fall. Actually it was the first half of the book. While he read the whole book once, he had read the Rise a couple of dozen times. When you asked him why, he said he didn’t plan on making the mistakes that would lead to the fall. He disappeared after 6th grade and was never seen again)
Posted by Steve Kopian at March 27, 2012