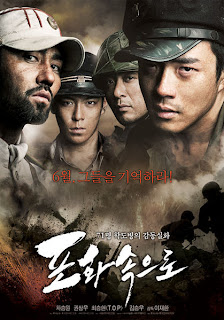 True story of 71 students who held their position in the line against the invading North Korean in 1950....Its the stuff of legend much like the Alamo.

The story follows a group of students, none of who have ever fired a gun, as they are marshaled together to defend a school at a vital point in the line. Given weapons and told to hold the line, they made a heroic stand...

I like this film a great deal, but I’m bothered by it’s construction. The film is essentially two fantastic battle scenes with a talky middle.

The film’s bookends are two killer action sequences. The opening is a teeth rattling bone jarring kick ass one which sets the bar incredibly high. Its one of the best battle sequences of the last few years. After that the film settles down as characters are introduced and the armies are moved into place. Other than a really well done cat and mouse battle in the tall grass the film is pretty much a character driven one for most of the middle 80 minutes. As with the Chinese film Assembly which completely changes gears in its second half, this quiet time is jarring, this film was advertised to me as the heroic, Alamo like, stand of a group of young men against impossible odds. I wasn't expecting the talky middle section. However when the final stand comes. its punch in the gut and incredibly sad (albeit more than a bit soapy), and the film redeems itself in spades.

The trouble is that the meeting of the various characters and the waiting for the soldiers from the North is done in too clichéd sort of a way. You can pretty much rattle off the types,. I don't like that they did it but I forgive it because I suspect it was done because there simply was too many to handle otherwise. For me the by the numbers handling of the characters kind of makes this less than it should be.

As with the recent film The Front Line I’m going to have to see this again in order to see how it plays out free of expectations.

Don’t let my public airing of private doubts stop you from seeing this. This is a really good war film that shows us the ugly stupid cost of war. What I really like is that the film manages to walk the incredibly fine line between gung-ho heroics for one's country while showing very clearly both the physical cost of war in what war does to the soldiers, and how it kills way too many good men and boys.

See it,it will move you. (also if you like to use your surround sound system to remove the dust from your living room, crank up the war scenes).

And if anyone knows the true story of what happened could you either let me know in the comment field or provide a link or something. I can’t find anything in English except references to this film. 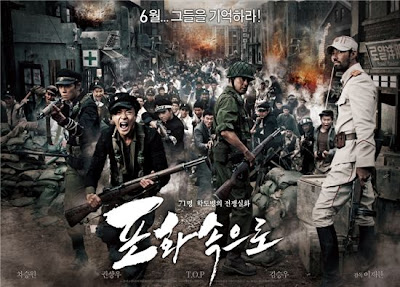