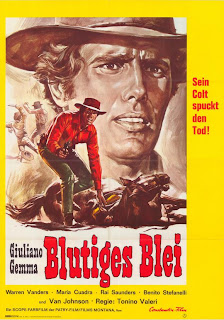 Six years after the JFK assassination some of the producers of the spaghetti westerns decides to retell the story in the old west. It’s something that your typical slow on the up take reviewer didn’t pick up until I saw the train station said Dallas.

Retelling aside this is a nifty, if a little too complex, western concerning a plot to kill the President of the United States. Its 1881, give or take, and President Garfield is touring the US. In Texas he is targeted by a band of men who want to break with the Union. The plot is discovered by a Pinkerton agent and a few others who seek to stop the impending murder and bring to justice the men behind the plot.

This is more a political thriller than a western, though the film has several excellent action set pieces. The meat of the film is really the plot to kill the President and all that follows in it's wake, rather than your typical good guys vs. bad guys for land, or a gold mine, or cattle or whatever. If you’ve ever seen any of the documentaries produced in the late 60’s or early 70’s from Europe and Italy in particular, about the Kennedy assassination that talk about vast Machiavellian conspiracies, then you’ll have an idea of what you’re walking into. For the most part it works as our hero is forced to navigate the plot at hand as well as the fall out from the Civil War (He and his father were on opposite sides).

A couple things I read on the film complained that the film isn’t historically accurate. My question is since when does anyone watch a western for historical accuracy? Accuracy wasn’t first and foremost on the minds of anyone involved. To the producers in Europe the American West was simply another location in which to tell their stories, it was not a place to give a history lesson. Van Johnson looks nothing like James Garfield, but he does vaguely resemble someone who could be called Kennedy. Garfield was killed in Washington DC, but if they move it to Dallas the film will have a deeper resonance. I don’t think the film needs to make the connections since the film is good enough on it’s own terms.

I like this film. Watching it as just another in a set of 44 spaghetti westerns from Millcreek I found that this was one of the films I stopped and actually watched with my full attention which is not something I did with many of the films since are bad enough that I skipped them or only paid partial attention. I like that there is a bit more effort being used to tell a story that is a bit more than your typical western. I also like that there is enough action to keep things from being too talky.

Its a solid little film.

Worth searching out.
Posted by Steve Kopian at March 24, 2012