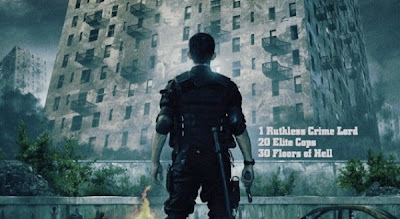 This is a two part review. The first part, before the Addendum is what I wrote after seeing the film at the sparcely attended press screening for New Directors New Films. It was a screening that was mostly quiet and respectful, not the sort of way you want to see a film like this. The Addendum is my reaction after seeing the film with an audience pumped up and primed for a good time. It also contains my feelings after two weeks of discussions on the film.

Gareth Evan's follow up to Merantau is a must see for action film lovers. Its a more or less nonstop battle between a group of cops trapped in a high rise controlled by some bad guys. They got in okay but they were spotted early and the plan to extract the main bad guy is thrown aside in favor of just surviving.

Gareth Evan's first action film, Merantau was a mixed bag. Its a film about a young man who leaves his village on a spiritual quest and finds himself having to fight bad guys to help a young woman he's befriended. The story is a soapy mess, however the action is incredible.

The Raid pretty much dispenses with plot and just throws us in the deep end with the team of police who head into the high rise. Almost from the get go the fighting begins. Its guns, knives, machetes, fists, clubs and everything else you can think of. Yea a plot creeps in here and there, but it's mostly disposable.

I can't say this enough the action is incredible. Its an amazing assortment of fights that will make you jaw hang open and make you yelp with pleasure. As a pure action engine this film is way up on the list. If you're an action junkie you will love this film. Its the best definition I know of action speaking louder than words 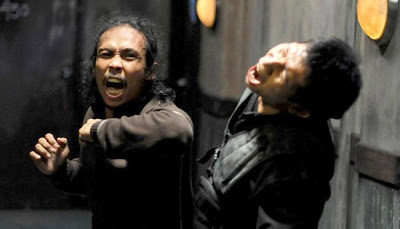 The twists and turns in the bits are fantastic. For example there is a sequence where our hero and a wounded officer are hiding in a false wall from some baddies. I won't say what happens but lets just say that one of the baddies want to make sure there is nothing behind the wall.

See this film with an audience of action film fanatics.

See this film and have a good time.

The picture at the top is prerelease art I found on line. The building in the film isn't 30 stories but 15.

I should say that, as much as I like this movie and as highly as I recommend it, I would not and will probably not put this on on my best of the year list. The action is amazing but Evans attempts at story telling results into some logic problems. Ultimately it doesn't matter, thats just my feeling- you want to see the film and I want to see it a couple more times.

I strongly suspect that how and with whom you see this film will determine how you react to the film. The more into action those seeing the film with you are, the more you'll like it.) 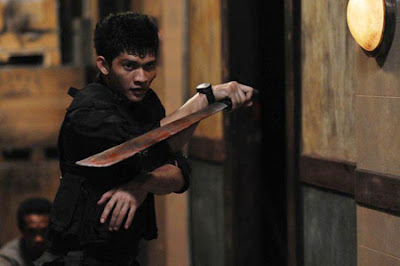 Last Wednesday night I saw The Raid for a second time at a preview screening set up by Fangoria Magazine. This time it was with a pumped up audience that included Mondocurry, Mr C, Rufus from cineAwesome, plus Roy, Joel and Earl. It was a loud verbal and very appreciative crowd that really got into the film and really got what was happening on screen. This was, and is the way the film should be seen.

Seeing the film for a second time I came to a couple of realizations.

First the film plays better the more you see it. Part of it is simply that on the second time through you can see little story bits from late in the film and see how they are reflected earlier in the film. Knowing some of the twists adds to what’s going on earlier.

Also seeing the film a second time allows you to really watch the action sequences. If you thought the sequences were amazing when you were watching the film for just the story, they are even more mind blowing when you can focus a bit more attention on them and a tad less on the story.

Walking out of the theater and talking with everyone after the film I felt certain that I was going to go home and change the review that I had written up when I first saw the film.

Strangely, other than adding this addendum I haven’t.

Yes it’s a thrill ride. Yes the film is a blast, there is something about the ending, something about the final battle, that kind of doesn’t work for me. I don’t think the film is bad. I do think it’s a mostly great film. I think I find that the resolution, after all that has gone before is kind of a let down…I think in large part that’s because the film was conceived at the first part of trilogy which mandates that you have to leave some plot threads open for what follows. It may keep the cash cow alive but it does mean that you can’t do certain things to your characters.

I stand by my initial feeling- that the film is a must see for action lovers. I also don’t think I’m going to end up with it on my best of the year list – though it has inched closer to it with the second viewing.

For Mr C's take on the film check oyt his home base Planet Chocko
Posted by Steve Kopian at March 20, 2012