Blood at Sundown (aka$1000 on Black) (1966)
This is the first place Gianni Garko played a character named Sartana. Its not the same Sartana as the later films, except the same name. The plot of the film has Johnny Liston come home from prison after 12 years. Johnny had been set up by his brother Sartana, who is now in control of their home town. A wild cliche filled film, this movie has everything, good and bad, you expect from a spaghetti western. If you can think of it I'm guessing it's in here somewhere. Pregnant pauses mix with seemingly deep and meaningful looks and actions. Its a film that really isn't all that good, and yet....you can't help by watch simply because its so damn entertaining. Watching it on New Years Eve I was staring at the screen going this is terrible I have to shut this off...no wait this is pretty good in its own unique way.... Worth a look if you come across it in one of the many western film DVD collections. 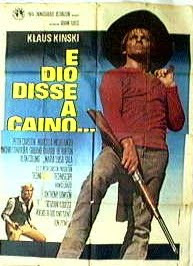 And God Said to Cain (1970)
Klaus Kinski plays Gary Hamilton who is released from prison after being wrongly convicted and heads home to kill the ones who wronged him. Kinski has one of his rare lead roles in a nasty little potboiler that proves that he should have gotten more leading roles (Kinski's inability to work with anyone without getting into a fight was the reason that he had small roles in so many films). At times more like a drama and at other showing signs of being a horror film, this is a solid little western thats worth seeing. My one word of warning is that while the film is available on the bargain market and can also be had in in many western collections, the prints are not always the best. While in some ways that adds to the film, in others it detracts. Also detracting is the dubbed voice that was given Kinski. Despite having seen Kinski with I don't know how many different voices coming out of his mouth this was the only time the voice seemed wrong. Despite it you really should track this one down.
Posted by Steve Kopian at March 17, 2012