Fistful of Lead (1972) or I am Sartana, Trade Your Guns for a Coffin 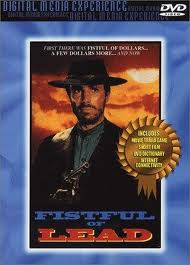 This is either the last official Sartana movie or just another one of the rip offs. My vote is a little bit of both. I think it's kind of a Sartana film because the people behind the scenes are the same but it lacks Gianni Garko in the lead, and as good as George Hilton is, he doesn't quite have the same umph as Garko.

This time out Sartana gets involved with protecting some gold shipments that are being stolen. In the course of getting to the bottom of it he runs into Sabbath, a man dressed all in white and who carries a parasol.

I'm not going to lie but this isn't as good as the other official Sartana films. The problem, aside from the lack of Gianni Garko, is the plot is simply a variation of what has gone before but with the addition of Sabbath as a villain. Sabbath is a good villain, but he's not a great one. He's more show than menace.

That said this is a good western. Its got some good characters, a few good shoot outs and some enjoyable repartee. Basically it's an enjoyable rainy afternoon movie.

Definitely worth searching out- especially since it is in several good Spaghetti western collections.
Posted by Steve Kopian at March 04, 2012