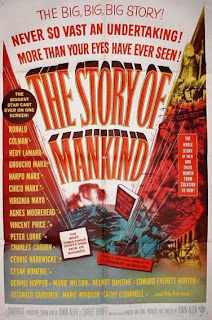 Yea well... this grand all star road accident is based upon a popular history of mankind is the sort of thing that proves how wrong Hollywood can go. Its proof that that the highs of Irwin Allen's hits like Lost in Space, Towering Inferno and The Poseidon Adventure were matched by real crap.

Taking Henrick Van Loons international bestseller and putting it in a shredder Irwin Allen came up with the story of a supernatural tribunal set to determine whether mankind will be allowed to blow himself up with a super H bomb. For the prosecution is Mr Scratch (Vincent Price) while for the defense is The Spirit of Mankind (Ronald Coleman). Jumping through the history of mankind via celebrity infested tableau's and mismatched stock footage, the pair looks at the highs and lows of human existence.

I can't imagine what the school study guides for this film looked like. I have no idea if they existed, but I suspect they did. Is this film history? Oh hell no, the film is so off base as to not even use a picture that looks even remotely like the Mona Lisa as the Mona Lisa. Its simply Hollywood excess.

The performances, with the exception of Vincent Price, were all phoned in. Pick any actor in it and odds are you'll see them at their worst here. Even allowing for them being often grossly miscast (Hemut Dantine as Marc Anthony, Hedy Lamarr as Joan of Arc, Agnes Moorehead as Queen ELizabeth, Vigina Mayo is Cleopatra, all the Marx Brothers...) the acting is really bad. So bad I'm forced to wonder if there was a completion to see who could be worst.

This movie is awful...and yet you can't look away. There is the awful road accident quality to it all that has slowly become somehow charming. Its everything you expect from a Hollywood blockbuster but done cheaply and badly. Its an unintentional yuck fest.

The fact that the film is a yuck fest is the reason to see the film. This is a film to watch getting some friends together with drinks and snacks. Its a party film. Its a film you watch and riff on...because lord knows you can't really watch this straight...I should know I've tried.

If you want a good time at a party give it a shot...also it's great to give to people you don't really like (just remember to swear up and down that you heard it was a great film).

Currently out on DVD from the Warner Archive
Posted by Steve Kopian at March 28, 2012