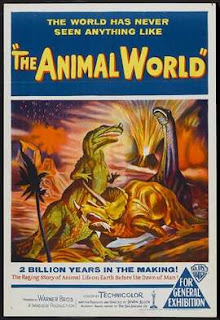 Irwin Allen's nature documentary is, at this point in time an amusing diversion. Sadly it's a film that hasn't stood the test of time but is still worth seeing.

Told as if it was the history of life on earth from creation of the earth until now, its a look at life from microscopic animals in the sea, through their evolution and climbing out on to land and into the sky. There is a stop over for a peak at dinosaurs (I'll come back to them in a minute), but mostly the film concentrates on animals alive today.

I'm not going to lie, some of the images are stunning and I can only imagine what some of this would have been like on a truly BIG screen. The images of the insects and some of the fish are just astounding and really blew me away.

The film does get into trouble in with the narration which is not only often dopey, but also insists on dealing with Biblical questions. God and scripture is too often brought in. The problem is not the mixing of science and religion, rather it's that the religious talk is condescending as if it was inserted so the film wouldn't be boycotted. There isn't a genuine line regarding the Bible in the film, and no matter how you feel about the Bible, you're going to be annoyed.

Honestly this is an amusing time capsule film that would be simply a nostalgic trip except for one key thing, the dinosaur sequence. If it wasn't for the dinosaurs you could forget the film. However since the dinosaurs were the work of Ray Harryhausen the film remains of interest. Actually the sequence is you typical dinosaurs battling each other sort of thing. It's five or ten minutes that ends with the dinosaurs dying in flowing lava.

How is it? Laughably bad. Its easily the worst work Harryhausen ever did. The problem is that producer Irwin Allen had no money and limited time so Harryhausen had to cut corners by using puppets and by animating things with more than one frame per move. (A full account can be had in the book Cheap Tricks and Class Acts by John JJ Johnson) Laughably bad or no it's still a fun sequence.

As for the rest of the film, it's worth seeing as a rental. I don't know if the film is worth paying the full 20 dollar cost from the Warner Archive, but for me, getting it on sale, it was worth the plunge.
Posted by Steve Kopian at March 26, 2012