How to Survive a Plague (2012) New Directors New Films 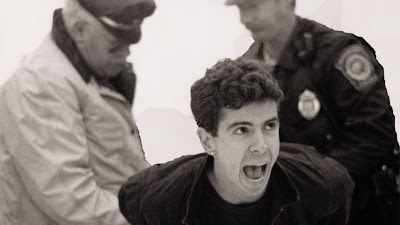 Moving documentary on the men and women who decided to ACT UP and try force someone to find a cure for AIDS. Told most through news footage and film and video from the period, and an occasional talking head, the film has a you are there feel. Its a film that puts you in the trenches.

If the film has any real flaw it's that it drops we the audience into the middle of things. As the film starts we are six years into the AIDS crisis. People are dying from a new disease. People like Jesse Helms refused to do anything because it was killing mostly gay men. The film assumes that we have some knowledge of what had been going on up to that point. It's a small flaw that is repeated a time or two later in the film when it assumes we know things already. Its a minor flaw but one that keeps this very good film from being a truly great one.

Great or not the film is full of many emotional moments. I dare you not to be moved by Larry Kramer's shaming of a bickering ACT UP meeting that was losing sight of things. His cries of "Its a Plague" is chilling, and heart rending because in the middle of everyone verging on being wiped out they were quibbling over some bullshit matter. Also moving is the march on the White House by the dead. We watch as the cremated remains of AIDS victims were carried, and then dumped on the White House lawn. I dare you not to tear up as lovers, friends and parents truly say their last good byes before they dump their loved ones on George Bush's door step. And there is a "we got lucky" when we see those who have survived the plague, and we see the pain of having lived through it when those they fought to save died.

I don't know what else to say other than I really like and admire the film a great deal.

See the it and understand that you really can make a difference and save lives....

The film is playing New Directors New Films before traveling to several film festivals and a regular release in the fall.
Posted by Steve Kopian at March 22, 2012