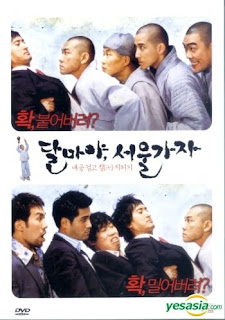 The boys…er monks from Hi, Dharma are back in another silly adventure.

This time out one of the monks is charged with bringing a package to the temple where their recently deceased leader grew up and was trained. Not wanting to let him out in the world alone two other monks go along, and there is a clash of cultures as the monks have to reconnect with the modern world, and deal with some developers who have designs on the temple property.

While certainly not quite up to the previous entry, this film is silly enough and charming enough to put a smile on the face. The best thing I can say, and frankly all you need to know, is that I laughed a great deal.

The majority of the film concerns the monks trying to raise enough money to buy back the temple. This allows for some amusing bits early on as they have to come up with ways to get cash. Later when they realize they have, but misplaced a winning lottery ticket, things spin out in all different directions as they try to retrieve it. The set pieces in the film, a night at a love motel, a competition for control of the temple, and a riff on a Mission Impossible style caper all bring wide smiles and more than a few chuckles.

Sue me, I liked it. I liked it enough that I wouldn’t mind sitting down and watching it again…once I get the DVD back from a friend I loaned it and the original out to.