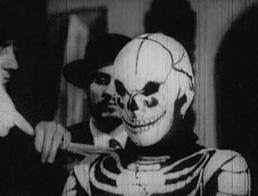 Talk about Psychotronic film, this movie from Turkey is one of the most amazing and jaw dropping things I've ever seen.

The plot has Kilink, a man in a full skeleton suit, being raised from the dead in order to continue his evil ways. His latest plot has him looking for a secret formula that will destroy the world and allow him to rule over whats left. The formula was created by a scientist who once worked for the evil Kilink, but fled from England to Turkey when he had the chance. Kilink catches up with the turncoat and kills him. The search for the formula is then on. Meanwhile the son of the murdered scientist is visited by a god like figure who gives him super powers whenever he says Shazam, yes that Shazam (though the suit isn't the same)

Can you say copyright infringement? Not in Turkey, where they have been stealing characters an film bit from Western movies for years. Kilink is actually based upon an Italian comic book character which they co-opted for their purposes. The origin of the Shazam character is lifted out of American comics. Its an odd mix and yet it some how it works. Taking the infringement even farther all of the music is lifted from other places, the Bond films primarily. No one is credited of course.

Kilink is a vile character, he's probably one the best screen villains I've run across, arrogant, amoral, charismatic. and deadly. Its simply a joy to see a character this bad plot to destroy everything. Darth Vader and Hannibal Lecter have nothing on this guy.

The film is full of sex and violence and everything that mom said was bad for us. Its done in a wild abandon that is absolutely charming. The fights are done with a sincerity that turns their raw violence into something often better than their polished Hollywood counterparts. At one point Kilink forces himself on a busty blonde who's just tried to kill him. With barely veiled promises of sexual ecstasy the rape becomes a seduction almost instantly, and while you can consider it sexist, there is something about the way that its done here that makes it less than morally reprehensible.

Kudos aside there are some warnings before you see this film. First off its often not up to "Hollywood" standards, at times it looks like a better than average home movie. It was done fast and cheap and at times it shows. The sound is tinny, or has been obviously over laid on top of the picture. You have to be forgiving of its imperfections. Worse the prints of this, and many early Turkish films, are awful. The films from the period were not preserved. They were churned out as fast as possible and then put aside in favor of the next one. There was no film preservation so whats survived are scratched, broken and missing bits of the action. If you don't go with it you will be driven mad by jumps in scenes due to lost footage. (and odds are its going to be subtitled)

If you can forgive the physical flaws of the film, you really should see this film if you get the chance. Its a wild mad dog experience thats the type of thing that real film lovers search out. Its a full steam fun film experience, with out a deep thought anywhere in sight.

Rating of 9 out of 10 is on the Psychotronic/Drive-in scale of unique movie experiences.
Posted by Steve Kopian at March 21, 2012