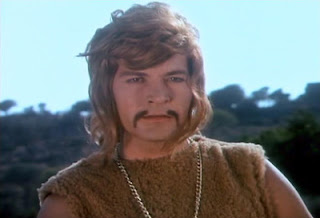 This is the first of a series of films about a Turkish comic hero named Tarkan. Its well produced spectacle (by Turkish film standards anyway) and contains more action and plot in its 80 minutes than most bloated Hollywood action films running twice as long. To be honest I have no idea what really goes on in this film since I saw it in Turkish with no subtitles, but it doesn't matter since you get enough to be able to care whats going on, even if you don't know all of the details (I think this is the most "complicated" of all of the movies).

The story has something to do with Romans, Huns and Vikings all running around in some part of medieval Europe. Tarkan who is traveling around with his wolf dog companion, is on some kind of a quest (what it is isn't clear until the end because I don't speak Turkish, though it has something to do with a magic sword). Along the way Tarkan helps some people who become his friends, beds the wives of the Roman emperor, and the Viking King, end up in the arena battling gladiators, falls in quick sand, fights a guy on a chariot, not to mention about two dozen other feats or daring do.

I don't know what to say but this movie moves like the wind. Sure its cheap and very silly, for example the vikings all have helmets that are way too big for anyone to wear and they are all dressed in pink and purple as if someone just discovered color, but at the same time its very earnest and has unique charm. The action scenes, with one exception, are handled well, and while not believable are fun to watch on their own terms.

I liked this movie a great deal. If you're willing to take it for what it is then I think you're in for a great time. If you need a perfect movie with absolute realism and a decent budget stay away. This is just a fun movie (that can be fun to make fun of). If you get the chance and want something adventurous, see this movie.
Posted by Steve Kopian at March 19, 2012