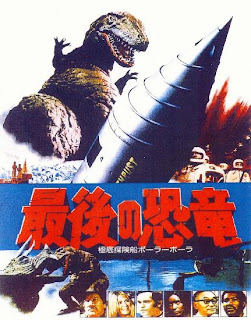 The Warner Archive has released the full theatrical version of this Rankin Bass produced film about the search for dinosaurs in a hidden valley in Antartica. The film was intended for a theatrical release in the US but I guess the silliness of the dinosaurs,especially in the wake of Star Wars, made the producers relaize it was a losing proposition and they chopped out 11 minutes and sold it to TV (at least in the US).

The film has a rich big game hunter going with a scientfic expedition into a hidden valley in Antartica that was reached via a huge lazer mole digging device. It seems that the our hero, Masten Thrust, only wants to study the dinosaurs. However when a tyranasaurus wrecks the camp, eats a crew member and steals the mole he is forced to go hunting once more.

There's more to it than that but thats enough to get you started.

I’m not sure if this film has improved with age or if I’ve just become more forgiving. Its also possible the restored 11 minutes help, but for whatever the reason. The Last Dinosaur is an amusing movie - with more than its share of cringe inducing. moments.

The cringe worth material starts with some of the cheap ass designs and sets, moves on to the uneven special effects and dinosaur suits (yes its men in suits time), and onward to the performances. Chief among the offenders is Richard Boone as the big game hunter, Thrust. He blusters his way through the material in away that makes you wonder just how later he was for the golf course when most of the scenes were filmed. He is way way over the top. Certainly he manages to have a sense of authority, but the fact he has one leisure suit through the whole thing makes me laugh at the silliness of it all. It kind of looks like his part was all filmed on one day.

Actually the really weird thing is that as “bad” as Boone is, his force of personality shines through and you realize that yea, this guy could make money, and would be a guy I followed into danger.

The weirder thing is that despite all that is wrong with the film, and trust me there are any number of things that are wrong with it, the film kind of works in its own fun level. Once you get past the crappy opening scene and painful title song, the film settles into being a retro-boys own adventure. It’s a film that is very much akin to the British produced Edgar Rice Burroughs films At the Earth's Core and The Land That Time Forgot which come from the same period, except this is a step or two down.

And where I would normally babble on about it not being high art, in this case the idea of art isn’t even the ball park.

Worth a look on a rainy Sunday when you’re in a silly mood.
Posted by Steve Kopian at March 28, 2012