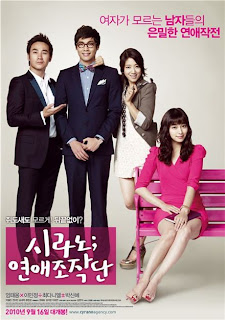 Here's a Korean film that anyone in the New York City area can see for themselves if they go down to the Tribeca Cinemas on Tuesday night. As with almost all of the films in the free film series its worth the effort to go see it.

The Cyrano Agency is a group of four actors who will act like Cyrano de Bergerac and secretly get the person of your dreams to fall in love with you. Their attitude is that the reason things look so good on TV and in movies is that it's all scripted. For a fee they will script and stage manage you into romance. Complications ensue when their newest client, a rich executive, asks them to make the girl of his dreams fall for him. The trouble is that the head of the agency once loved the girl, and despite his statements to the contrary, he still does.

Get ready to smile and feel good.

I know the Koreans are good at action films, and I know that they are gangbusters at making some of the most painful and depressing films ever, but they are also masters of the romantic comedy. In all honesty some of the best films of the genre over the last decade or so have not come from the US, or even France, which is long held to be the romance capital, no, they come from South Korea. I could probably name a half dozen warm you to the core, make you smile from ear to ear romantic comedies with out blinking (Castaway on the Moon, Spy Girl...). Add Cyrano Agency to the list.

God damn I was smiling from ear to ear about ten minutes into this movie. Sure I knew how bits of it was going to go, but at the same time even as they were traveling well worn rom-com paths they were hitting each and every note dead on perfect.

No, it's not perfect, as I said the film can be a little too predictable, but in all honesty watching this film I was having a good time, which for me, who was in a misanthropic mood when I put it on is reason enough to recommend it.

If you like romantic comedies, or even just comedies, go Tuesday night or track this film down. Its a small smile producing pleasure.