The best part of being a pirate is Ham Night!

By the time this posts the NYICFF will be over.

It was their best year ever.

Thank you NYICFF for a great time.

Thank you all for great films, for (mostly) great audiences and for putting up with this crazed reviewer. Thanks to the wonderful ladies at the tables, who's names I never learned, but who always smiled and said hi. Thanks to festival director Eric Beckman for taking time to talk about the movies and for being great fun in the pre-film intros and t-shirt tosses (get some sleep you earned it).

I can't say enough in the way of thank you. I've already cleared my schedule for next year...I don't think you'll be able to top this year...but damn I can't wait to see you try.

The final day of the festival had three films. Cinderella Moon ran at the IFC Center. I saw that on the first day of the regular screenings and there was a nice symmetry to it running on the last.

The festival also ran the wonderful Le Tableau. I loved the film. I was originally supposed to see it here but I saw it at a press screening. I had considered seeing it again, but decided to hand off my ticket to a friend at work who is a huge fan of animated films, particularly the films the festival runs. 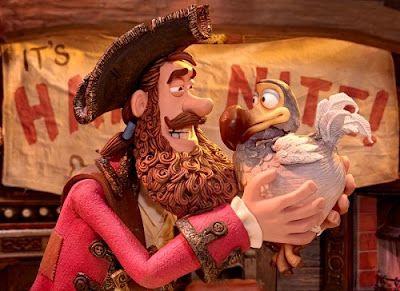 The other film run today was a special preview of Peter Lord's Pirates! A Band of Misfits. I kind of wish I hadn't seen it since I now have to wait a month to see it again.

Based on the books by Gideon DeFoe (who wrote the screenplay) the film follows Pirate Captain (that's his name) as he and his crew, attempt to win the pirate of the year competition, get mixed up with Charles Darwin and battle with Queen Victoria.

Full of great gags, tons of in jokes and an unending references this film is a funny funny movie. It's the sort of film with so many jokes that you're going to have to watch the film five of six times in order to catch everything.

The film is also a good adventure. Sure the thrills and chills are decidedly off beat (the bath tub chase for example) but they are thrilling.

I really like this movie. I can't wait to see it again.

I should say that the film is in 3D. The use isn't bad, but for me it's kind of pointless. Only towards the end, as Pirate Captain takes on Queen Victoria does the 3D add anything. The 3D adds a great sense of scale and place as we see Victoria massive war ship.

You really want to see this....

And with that the NYICFF ended for me, and Randi, John and Bully. While I'm sad that the film festival ended, it did so on a high note.

Thank you again guys. It was great.

(I'll post the festival winners as soon as they announce them. I'll also post a piece on the wonderful short films I saw)